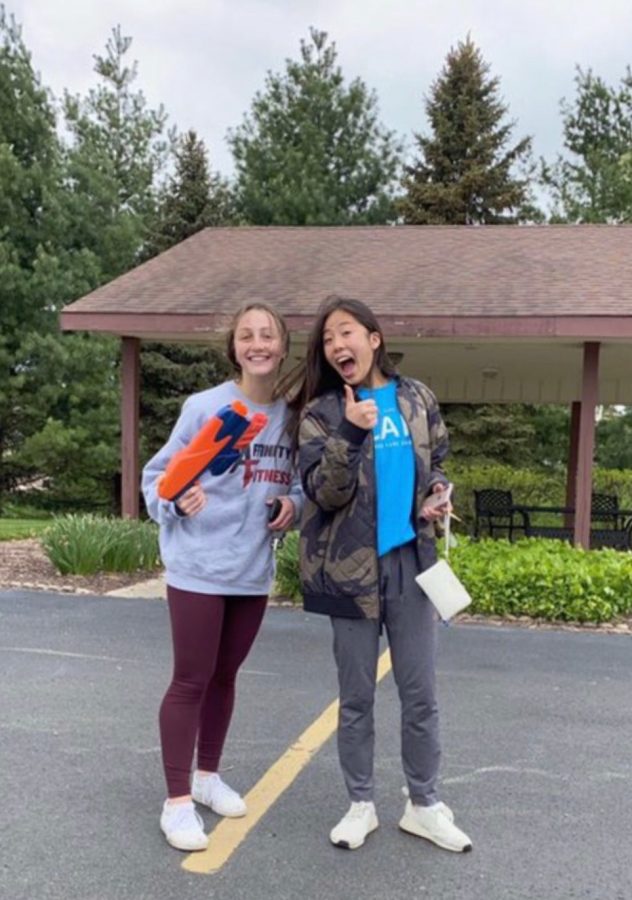 As the weather warms up and the school year comes to a close, seniors at Metea begin their senior traditions. From prom, the senior sunrise brunch, senior road trip, “senior assassins,” and graduation, Metea’s graduates have many end-of-the-year events with their classmates. However, this year, many of those traditions had to be modified to keep everyone safe. Prom had no dancing, an impromptu tailgate event took the palace of the senior sunrise brunch, and graduation will be outside at the Metea stadium with only two guests per graduate. Yet, “senior assassins” remained largely unchanged. Due to the nature of the game, seniors were able to participate in the highly anticipated senior tradition.

“Senior assassins” is a student-run game where seniors are given a target to eliminate by splashing them with water. Participants have until the end of the round, which lasts a week, to eliminate their target and not get eliminated themselves. There are prizes for being the overall winner, second place, having the most creative kill, and more. There was a $10 entry fee to fund the prizes, and there were 142 senior participants.

Fourth place winner Jenna Popko decided to join the game after looking forward to it for all of high school.

“’Senior assassins’ was always something that I looked forward to because it’s a really fun thing that we seniors do,” Popko said. “I like competitive games, and it was especially fun because it’s your senior class and you know everyone, and it’s really the only opportunity like this that I’ll ever have because it doesn’t really work in college.”

First place winner Makayla Dutkanych helped her senior friends eliminate their targets during her junior year, but she was excited to try her hand at playing for her final year of high school.

“I decided to join because I had seen all the past seniors play and I loved watching the Twitter and seeing who was getting out and all the fun ideas they came up with to get their targets out,” Dutkanych said. “Last year, I helped some of the seniors get their targets out, so I wanted to have fun with it this year myself.”

Being a completely student-run game, a few seniors must forfeit their hand to play to run the game. Seniors Elaina Meisinger, Morgan Bond, and Dipankar Yettapu took up the role to moderate this year’s game.

“In typical years, it’s usually passed down from past years, and so last year, Rissa, she was in charge of it and she talked to me about running it, and then I was just asking around to find other people that could help me,” Meisinger said. “I ended up asking Morgan and Dipankar, and they both wanted to help.”

In order to maintain the integrity of the tradition, the moderators worked hard to help keep the game safe while changing as little as they could.

“There was a lot of planning that went into it,” Meisinger said. “We actually started talking about it three months before we even said anything, just trying to figure out how we were going to communicate with people, if it was fair for only in-person people. We had to go through the rules and rule out certain things.”

One of the changes applied to the “most creative kill” prize section. To be considered for that prize, the player must be wearing a mask. The moderators wanted to incentivize people to wear their masks for most of the game to keep the players safe and comfortable.

The second change was during the third round, where, for an additional $10, players could eliminate any of the three moderators to get back into the game.

Meisinger, Bond, and Yettapu ensured that the game remained largely unchanged to provide seniors with an experience similar to previous graduated classes.

“We worked so hard to make sure that this one thing wasn’t changed,” Bond said. “Going into it, me, Elaina, and Dipankar were like, ‘we’re missing out on so many things, let’s make this memorable.’ ‘Senior assassins’ is so fun. It’s not something you want to miss out on when we’ve already missed so much.”

Dutkanych was glad to participate in this senior tradition, both to experience it and continue the tradition in future years.

“So much has changed this year because of COVID, and we all just want a normal year, and for me, having all these traditions like senior road trip, prom, senior brunch, even powderpuff, that was really important to me,” Dutkanych said. “I knew that the one thing with traditions that would be normal was going to be ‘senior assassins.’ That was really important to me that I would still get that senior feeling being a part of this and keeping that tradition alive.”

For Dutkanych, she missed out on some of her favorite “lasts,” like her last powderpuff tournament. She hopes that the class of 2022 understands what the classes of 2020 and 2021 missed out on and that they use that to fuel their appreciation.

“I really hope that next year, the seniors can really realize that the class of 2020 and the class of 2021, they didn’t get all those things that all the seniors look forward to, so I hope that they really take advantage of every single senior activity that they’re provided with because we didn’t get those same things and I would really do anything to get those normal senior traditions,” Dutkanych said.

As an emcee, Meisinger is at the front lines of school spirit. She noticed the jarring difference due to COVID-19 restrictions, but she has hopes for improved school spirit as normalcy returns.

“I hope that their spirit gets so much better,” Meisinger said. “Also with being an emcee this past year, I hope that the emcees next year have so much fun and that the crowds at games get bigger and the crowds at tailgates get bigger, and that everyone’s just more excited for school spirit, especially after such a lacking year. I hope that they get to do all the same traditions that we did, maybe more normally, if that’s possible with the COVID mandates, but I definitely hope they get the same thing as us and that they get even more.”

While missing out on senior traditions is frustrating and devastating, Bond would not wish it upon any other class.