After an extended off-season, boys tennis gets back to usual despite the looming mandates 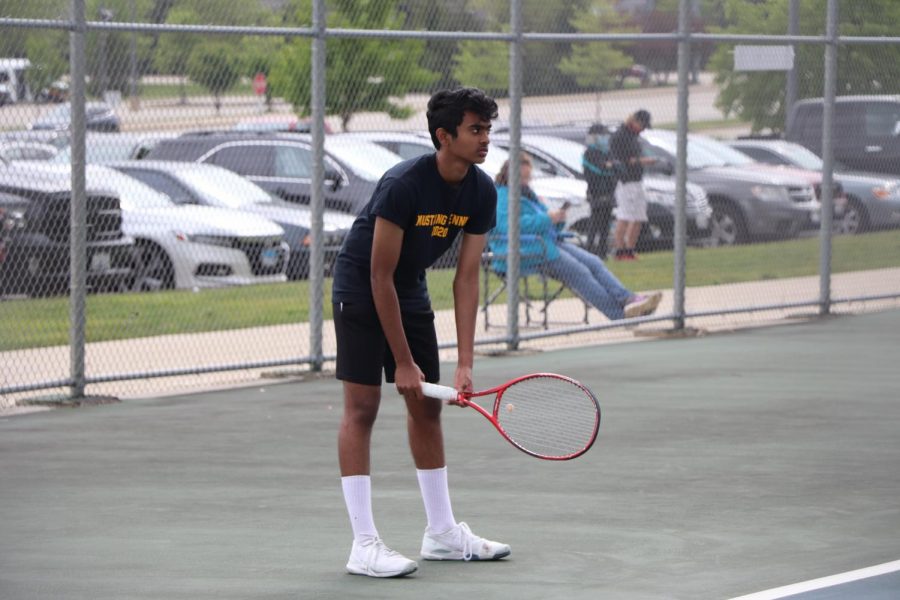 The boys' tennis team has stayed strong despite an overwhelming season.

The boys’ tennis team has had an action-packed season this year. The Mustangs were able to bounce back after disappointing news struck the team last season. The season being canceled last year gave the boys an extended off-season to work and critique their game for the future. As good as the extended off-season was, head coach Kole Clousing is disappointed by the fact that talent was wasted last year.

“I was very upset about the season being canceled,”  Clousing said. “We were going to have a pretty good team that would have been competitive. We had a lot of seniors and it was upsetting that they did not get to play their senior year.”

During the season, practice has had the same benefits for the athletes as off-season practice did. One major issue that has struck the team is the several rules and regulations that have been implemented for the athletes and coaches. Both have had to endure new and unusual mandates, like the increased distancing and wearing of masks, that all other sports have had to face. Despite tennis being unquestionably one of the most socially distant sports, the safety precautions have been able to minimize any risk between the coaches and players. Athletes like junior Kevin You were able to capitalize on the unfortunate event and turn it into beneficial practice time.

“Practice has been very good,” You said. “The precautions I follow are wearing my mask, avoiding making physical contact with others, self-certifying every day, and following other COVID rules.”

You was not the only player to improve in the off-season. Senior Matt Chen changed his game through increased practicing and became a more versatile player while strengthening his awareness. In the eyes of Clousing, Chen has improved the most this offseason because of his improvements over several areas in tennis.

“Matt Chen is becoming more consistent, more aggressive, and more aware of how to fix his mistakes,” Clousing said.

The big strides in improvement have been tested during the season. Metea has faced off against several teams like Neuqua and Naperville Central. The tough schedule has not stopped any progression but it has challenged the players.

“One challenge I have encountered this season was mainly losing to other schools,” You said. “I have lost two matches this season and both have been really tough physically and mentally, but I have learned to get over them.”

Clousing has shared a similar opinion on losing this season. Despite going up against physically stronger opponents, there is always something the team can do to pull off a win. Though, in a few of Metea’s games, they were not able to win. Some of their games, like the ones against North and Neuqua, are tough because if they played a little better, than they would have won

“Losing to Naperville North and Neuqua knowing we should have played better to either win or have fought better,” Clousing said. “That cost us a chance for third place in the conference.”

There have been several good moments that overshadow the sour moments. The coaching staff has been able to note and see that the team can come together to pull off a big win. The Palatine Invite was a great example of the teamwork the guys possess because they were able to combine as a group and get an important victory.

“Favorite moment was winning the Palatine Invite,” Clousing said. “It was a great moment of teamwork and coming together.”