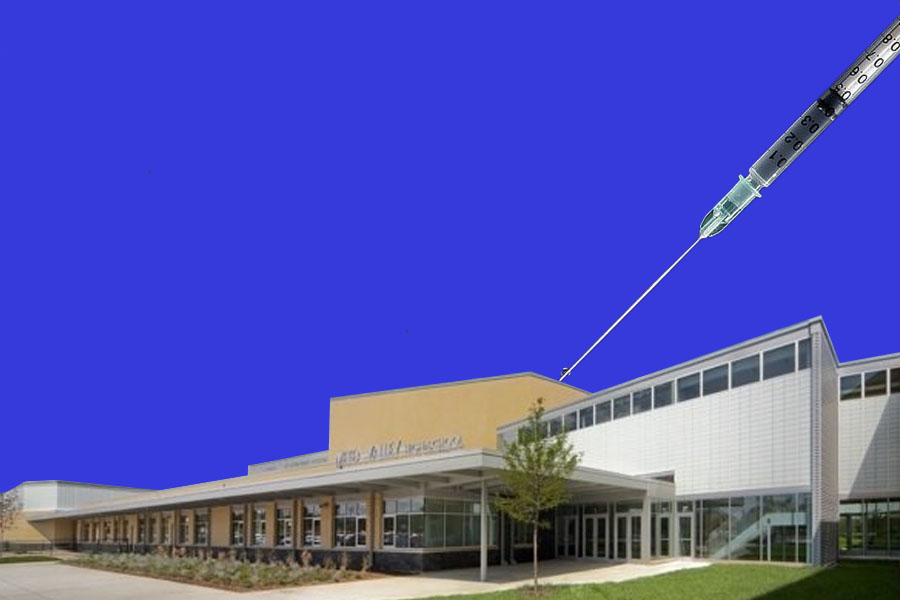 As the new teacher vaccine mandate is implemented on Sept. 27, teachers share their opinions on the new mandate.

When students in first period ceramics class opened their Chromebooks on Sept. 27, their substitute teacher told them to watch the video that art teacher Karly Olson left for them.

It was not the typical video message from an absent teacher. In it, she referred to masks as “muzzles” and claimed the vaccine is “gene therapy.”

“The reason I am not at school is the administration has enforced the jab mandate, as well as if you refuse the jab, then they are requiring testing,” Olson said in her video, which was posted on Google Classroom and YouTube.

Olson’s video raised questions about teacher vaccines and testing mandates. When the video was released, students were shocked that a teacher was willing to be that vocal regarding their opinions.

Governor JB Pritzker released a new mandate on Aug. 26, stating that all teachers must be vaccinated or tested weekly in order to continue their job. Originally, the deadline for the vaccine was Sept. 5, but in order to give more time to get the vaccine the deadline was extended to Sept. 27.

District 204 has reported that 7.8% of staff have declined the vaccine but are complying with  weekly testing. The district refused to provide how many teachers declined both the vaccine and weekly testing citing privacy concerns.

“I think that teachers should get the vaccine and be conscious or aware of the consequences of not being vaccinated,” junior Ishani Sahu said.

Even with over 90% vaccination rates, some teachers choose not to receive the vaccine due to religious or health exemptions. Teachers who found some concerns regarding the mandate were able to express these concerns with the local teachers union.

“Teachers have objections they consider to be reasonable and legitimate, in terms of potentially religious objections or health related objections,” Naperville Unit Education Association president Dan Iverson said. “Teachers are concerned about making sure that they can continue their employment in spite of the mandate.”

While teachers can undergo weekly testing instead of receiving the vaccine, teachers like Olson are refusing both options.

The question on whether or not a vaccine mandate is constitutional is being debated within the Supreme Court as well as school districts. Ten states so far have required teacher vaccination. Some COVID vaccine mandate cases have been taken to court, but due to lack of strong argument and sufficient evidence, most mandates have been left untouched.

The Supreme Court has indicated that they will not get involved in any vaccine or mask mandate debates. On Aug. 12, Justice Amy Coney Barrett chose not to block a case of Indiana University making vaccination a mandatory requirement for students entering the new school year.

“My concern is making sure that those people who do not want to be vaccinated that their status is upheld to the maximum possible degree,” Iverson said. “I think we have done that, and the mandate itself is constitutional. There is ample constitutional law to back that up.”

“On the state level, yes, the Supreme Court’s Jacobson holding is still good law, ” Lee said. “It is within a state’s right to protect the public’s health by requiring vaccines and masks. All 50 states and the District of Columbia require school-aged children to receive vaccines for measles, rubella, and polio.”

English teacher Casey Solgos is in favor of the vaccine and believes it is important to become vaccinated and protect those who can not.

“I do not think it is a bad idea to have such a mandate. It is not unique to teachers,” Solgos said. “It is great, I think, especially for teachers who have kids who are not able to get the vaccine yet.”

Although Olson’s video caused some shock, students are also not surprised that teachers are lashing out against the mandate because of other local situations.

“I was very concerned, but I was not shocked because these situations have happened frequently and not specifically limited to Metea Valley but all over the area,” Sahu said.

Olson has not been teaching her classes since Sept. 27.  At the Oct. 18 school board meeting, the board approved the recommendation to issue Olson a Notice to Remedy. Specifics of this notice are confidential.