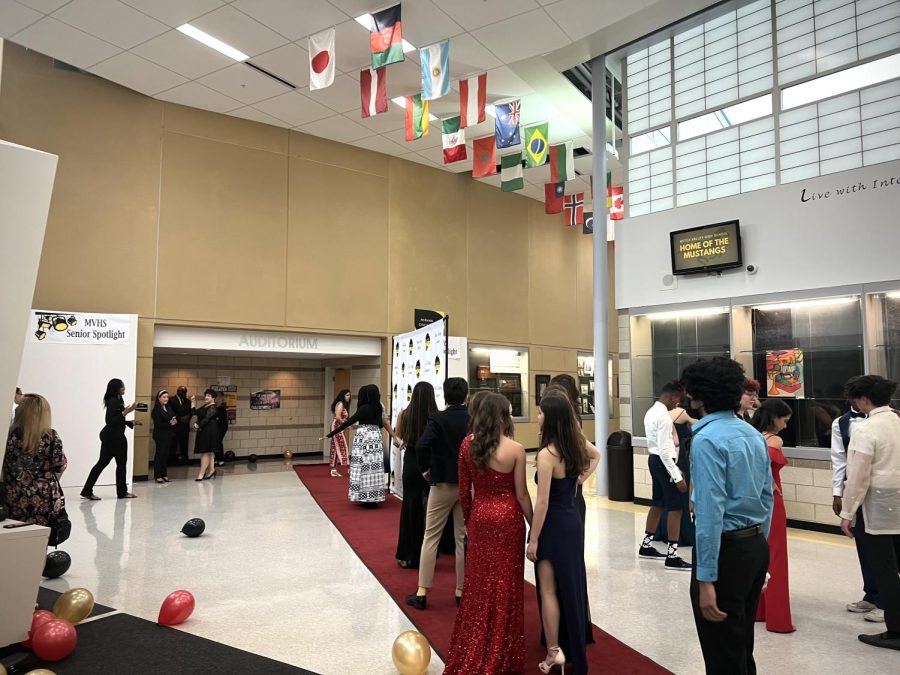 Students line up to take photos with each other infront of the backdrop.

The end of the year is almost here, and students are wrapping up their in-school activities. Following the well-performed shows of “CLUE: on stage,” Winter Scenes, and “A Chorus Line,” theater students gathered by the auditorium to celebrate their hard work by attending their end-of-the-year banquet on May 17.

It was red carpet themed as there was a red carpet, photo backdrop, balloons, food, and students dressed up for the occasion. Following taking pictures and socializing with others, the students transitioned into the auditorium as there were performances, speeches, and announcements for the following year.

“I know that we will be having a variety show, we will be showing our short film,” sophomore Kevin Paul said. “We also have, I believe, senior shout outs as well as the International Thespians Society (ITS) induction.”

The current officers, senior Skylar McClure, senior Amara Saleem, and senior Lauren Verthein announced that the ITS officers for next year will be current junior Gabrielle Gudgeon, sophomore Kevin Paul, sophomore Ollie Shuminas, and junior Kaylee Harper. Although these members are excited about their new positions, they will miss the seniors leaving them.

“I will really miss the seniors next year because I have gotten so much closer with them,”  Gudgeon said. “I already went through this process before, but I know that they will go out and do amazing things because they are all very talented.”

Some other announcements made by the officers were the shows that the theater program will be performing next year. The two fall plays will be Radium Girls and Jack and the Magic Beans, and the musical will be Big Fish. With the leadership of the new officers and help from other students, the program hopes to keep its legacy and teach the new underclassmen how the program is run.

“Yes, I am excited for [new members to join] because it is going to bring a new wave of talent and interests to the theater,” sophomore Naomi Salansky said.

As new members join, current members reflect on their year. There was a lot of positive feedback from this year’s theater experience, as many students said they enjoyed the show “CLUE: on stage” the most.

“I really enjoyed CLUE because it involved a lot of physical humor, and it was a really slapstick comedy,” Paul said. “I loved performing Mr. Green, and I really loved the twist at the end. It was a smaller cast, which meant that I got to grow with them a lot more, but I also enjoyed the musical. Both of them were fantastic.”