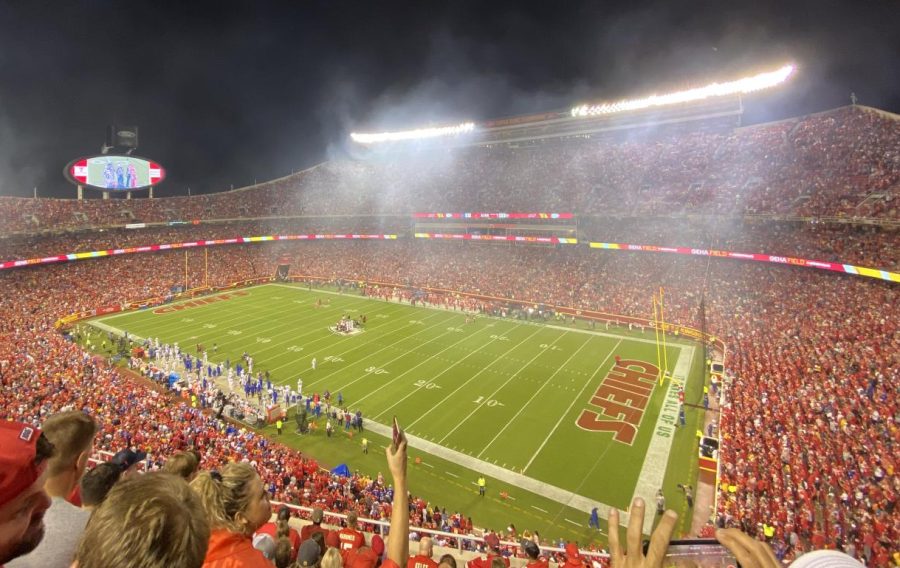 The NFL season is looking highly promising for football fans.

The previous Super Bowl, with the teams the Los Angeles Rams and the Cincinnati Bengals, had over 112 million viewers. The off-season marketing as well as the hype of the National Football League (NFL) season did not slow down. With the 2022-23 NFL season kicking off, there is a lot of new off-season information that will play a big role in the buildup of the new season.

Arguably the most exciting and significant part of any new NFL season is the rookies. Rookies drafted in the first couple of rounds are the new faces of their fan bases, teams, and the NFL as a whole. The number one pick in the 2022 NFL draft was an outside linebacker from Georgia Travon Walker. He was selected by the Jacksonville Jaguars as they have to try to improve their defense considering they lost their number one linebacker, Myles Jack, in the off-season. More big-named rookies include Aidan Hutchinson, Ahmad “Sauce” Gardner, Kayvon Thibodeaux, Chris Olave, Jordan Davis, Kyle Hamilton, and Kenny Pickett. These are a few of the most talented rookies in the league that will change their teams for years to come.

NFL teams trading for, or signing players through free agency is essential for taking a team to the next level. Some of the big-time trades and signings happened throughout the off-season. Wide receivers were the biggest “trade bait” as contracts were coming to an end and many good receivers wanted to get paid. The former Green Bay Packer receiver Davante Adams was traded to the Las Vegas Raiders as the Raiders’ number one wide receiver, Henry Ruggs III, was arrested last season for vehicular manslaughter and driving under the influence (DUI). Adam’s new contract is $28.5 million a year for five years and he reunites with his former college quarterback, Derek Carr. Another massive trade was former Kansas City Chief receiver Tyreek Hill. Tyreek Hill, known as the “Cheetah,” has extreme speed and athleticism which earned him a record-breaking $120 million contract for four years. AJ Brown was traded on draft day to the Philadelphia Eagles and earned himself an unbelievable contract of $100 million over the course of four years. For the quarterback position, there were many signings and trades such as Russell Wilson joining the Broncos, Deshaun Watson joining the Browns, Drew Lock joining the Seahawks, Mitchell Trubisky joining the Steelers, Matt Ryan joining the Colts, and Carson Wentz joining the Commanders. But once all the rookies and some veteran players join their new team, the hype is directed toward the start of the regular season.

With the NFL always changing and keeping fans “on their toes,” this NFL season has a lot of excitement. One big change to the NFL is Thursday Night Football (TNF). A lot of people could turn on their television, go to their FOX channel, and watch football on Thursday nights. FOX held an exclusive deal with the NFL to be the only broadcast network for TNF, which was a $3 billion deal from 2018-22. FOX opted out of the final year of their contract and Amazon Prime is now the sole broadcast network for TNF. There was a lot of backlash about Amazon Prime having the rights for TNF as people have to pay for a separate subscription to watch TNF. The backlash was so bad that Amazon Prime spoke out and told viewers they are not changing the game of football, they are changing how you watch it. Amazon Prime has rights to TNF from 2022-33, but they will only stream 15 games total this season. Therefore the first game of the season aired on NBC between the Rams and the Bills on Thursday, September 8th.

In the first game of the season, despite a 31-10 Rams defeat in the season opener, the Rams and Bills are still two of the heavy favorites to make Super Bowl 57. Other favorites include the Packers, Buccaneers, Chiefs, and Chargers. CBS Sports has ranked the Buffalo Bills as the number one team in the American Football Conference (AFC) and have a predicted record of 13-4. CBS also ranked the Green Bay Packers as the number one team in the National Football Conference (NFC) with a predicted record of 12-5. This year’s super bowl will be held at the State Farm Stadium in Phoenix AZ. It is hard to determine who will hoist the Lombardi Trophy this year but the rookies and offseason signings have a big role to play.