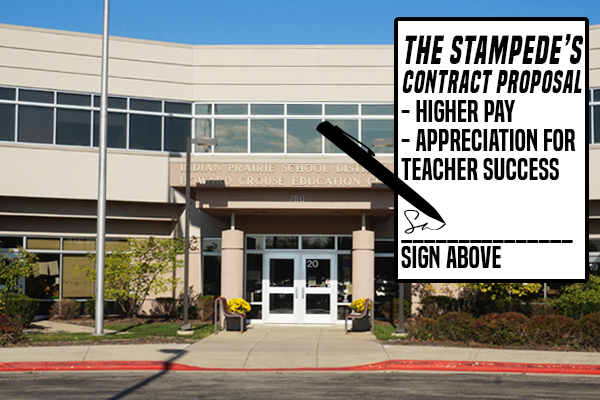 For only the second time in District 204 history, teachers rejected a new contract deal Oct. 2. The new contract provided a 2.45 percent pay increase in the next few years and would eliminate post-retirement insurance.

Teachers voted no to the contract 57 percent to 43 percent, and The Stampede agrees that teachers in our district deserve higher pay and fair benefits.

The fact is, teachers are not being compensated for the achievements and successes they have helped students reach. According to District 204’s report card, published by the Illinois School Board of Education, 77 percent of students scored a 21 or higher on the ACT, deeming them college ready, compared to a state average of only 46 percent scoring a 21 or higher.

Education and teachers are necessary for any individual to succeed. Though statisticians do not spend their days counting the number of boys and girls they work with, or comparing the numbers of red cubes vs. blue cubes, these preschool and elementary activities are necessary. These statisticians would not be able to analyze data, run experiments, or draw conclusions without those activities which build critical thinking, analysis, and synthesis skills. Teachers are the foundation of any person’s education or career: they deserve to be paid more.

Clearly, District 204 teachers have made a greater impact on their students, and they deserve to at least be given equal pay as these 203 teachers, if not paid more. However, where can this money come from? It’s true, the state is broke and it certainly does not seem like we will be getting more money from the Illinois state government, so raising local taxes seems to be the only way teachers will receive equal, fair pay.

In 2014, 84.9 percent of revenue for District 204 came from local property taxes and only 12.1 percent of funding came from the state. On average, schools in Illinois receive 26 percent of funding from the state. Providing the district with its fair 26 percent would be roughly $85.8 million annually: the state does not have this kind of money. For District 203, which serves 16,917 students, it would receive $67.6 million if it got its fair 26 percent, slightly more than $20 million less than what District 204 would receive. Obviously, these revenue gaps would be unfair.

Yes, District 204 is the third largest school district in the state of Illinois, according to Niche, however, it also ranks as the fifth best school district in the state. For a district which provides such exceptional education to so many students, shouldn’t families be willing to pay higher local taxes to repay teachers for their contributions to education? For these teachers, 70.1 percent possessing a master’s degree or higher, shouldn’t they be paid fairly for providing their extensive education and knowledge? For the district’s above average ACT score, or 86.6 percent of district students having passed at least one AP exam, according to US News, shouldn’t teachers be compensated for helping our students become college ready or saving families from paying expensive tuition costs through AP credit?

For those who would oppose raising property taxes to pay these teachers, since they do not have children attending our schools, they must recognize that today’s students will impact society tomorrow. Many adults predict that Generation Y will put America on a slippery slope of demise. By improving education, then we will ensure that Generation Y will be prepared to succeed in the work force. If teachers are paid more, then we can guarantee the quality of education will continue to progress from already exceptional levels.

The teachers’ union and district officials have arrived at a third tentative agreement, which teachers will vote on next Friday, Nov. 13. Considering the impact they have made on our lives, our teachers should not accept less than what they clearly deserve.