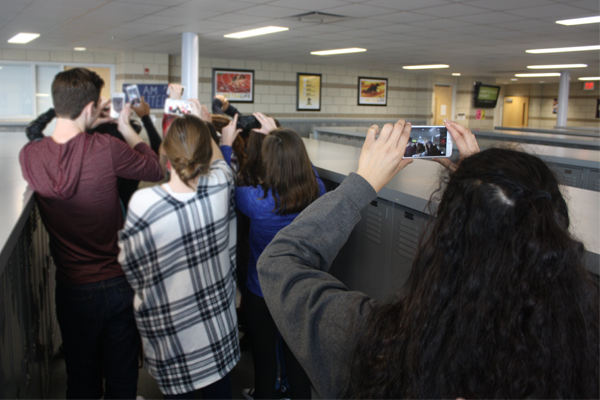 Just in the last week, four fights broke out among students in our school. Yes, we walk around school or go to class and hear that there was a fight during the passing period before. But through the glory of social media, we don’t have to just “hear” about it, we get to see it.

These fights were posted online, shared, and retweeted hundreds of times. They pushed one student to change the “F” in Metea’s “LIFE” mantra from “Foster positive relationships” to “Fights” and post it on Twitter. They received so much attention that accounts such as @ThirtySecFights reposted these videos on its account to receive attention from its own 750,000 followers… great.

The problem doesn’t lie in those accounts, however, the problem is with students who think it’s okay to post these videos on social media. Social media is a great platform for sharing and entertaining others with funny videos or pictures. There are harmless videos we can share that are at an “America’s Funniest Home Videos” level. That is entertainment, students fist fighting each other is not.

Obviously, fist fighting is an ignorant way to solve a problem, and it definitely is not meant to be glorified through Snapchat stories and clips on social media. Fights are extremely rare at our school, so posting them on social media and sharing these fights shows a lack of pride and respect for our school.

There have been more fights in the last week than there have been the entire school year: this is not common. Maybe these people do not respect or hold as much pride in Metea and know what it stands for, but fist fighting is absolutely not a part of our culture. We shouldn’t make it seem like it is.

Our students and school have many accomplishments. Why are we putting ourselves in the spotlight for something so negative? In the same week of the fights, we had music students attend the all-state music conference, the cheerleading team qualified for state, and seven art students were given a golden award to compete nationally. Be proud to go to a school with such a diverse community that has achieved so many great successes.

It’s embarrassing that a very small number of students think it’s okay to fight one another and create such a bad reputation for the school. The last week was filled with exciting moments for Metea Valley, but the fights that occurred definitely were not one of these highs. They were shameful and sad for the community.

Metea is a school of high respect: we need to take pride in that. Stop sharing these videos and next time you see a fight, rather than taking out your phone, go find an adult to stop it. Students share these videos on social media for the purpose of racking up retweets and gaining followers, but capturing a school fist fight is not the way to entertain your Twitter and Snapchat followers. In the moment, the fight may seem cool and reckless, but I’m sure the people fighting didn’t feel too cool or reckless afterward as they were handcuffed and taken in a paddy wagon to the police station.

Now in my eighth and final semester, seeing people quote these videos with “Go Go Mustangs” makes me furious, this is not what the school I am so proud to attend is or has been about.

Let’s not submit immature posts like “Metearaq” to be posted on the Illinois Smack High account. Let’s not instigate or promote fights by taking out our phones to video tape. Let’s not describe ourselves by the actions of only a few students, less than .003 percent of our student population. Let’s promote and recognize our school like the incredible institution that it truly is.