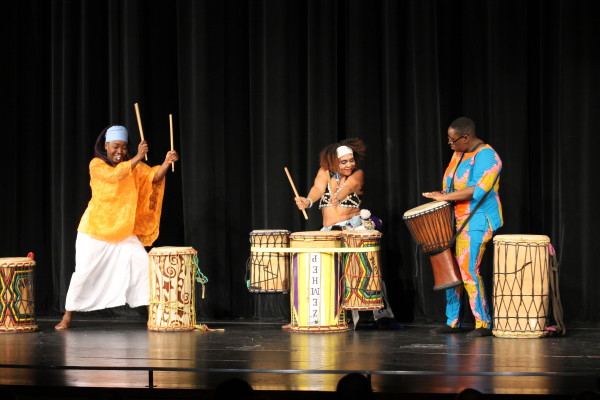 Students, staff, and special guests gathered to celebrate the “hallowed grounds” of African American history with the Black History Month assembly in the auditorium this past Thursday.

The theme, “Hallowed Grounds,” symbolizes the recognition of the influence of past and present African-American leaders, and the strides they made for the equality we work towards today. “Black History Month has been a time for me to personally reflect upon all of the opportunities I have been given due to the hard work of my ancestors,” Dean for The Class of 2016 Jennifer Rowe, who helped organize the event, said.

The assembly began with a performance of the traditional song, “Lift every Voice and Sing,” by the varsity singers. The song tells the story of the struggles, as well as the pride, of the African American people throughout history.

Next, the Ayodele Drum and Dance ensemble took the stage with an engaging performance of a traditional dances and drum techniques. Imania Detry, one of the lead performers, explained that Ayodele’s mission is to “share the knowledge of (African) culture.”

Rowe noted the importance of exposing students to all sides of history. “It is important for all of us to experience a wide range of cultures and to listen to different voices,” Rowe said.

Aurora’s Mayor Tom Weisner spoke at the assembly about the progress in racial equality that still needs to be made. “2015 was not a particularly good chapter in black history,” he said, in reference to the numerous incidents of police brutality and other acts of violence against the black community. “But 2016 is the year that those issues need to be addressed and changed once and for all.”

“I think that every individual wants to feel valued in their community and to also be recognized,” Rowe said. The assembly demonstrated that Metea holds values of  inclusivity, and that all cultures are celebrated.

“Black history is American history,” principal Darrell Echols said. “And we celebrate that all year long.”