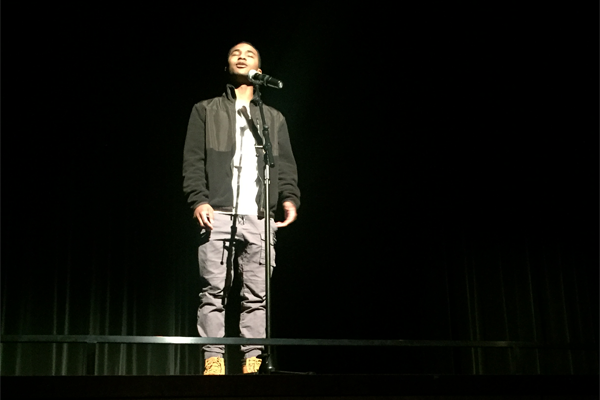 As part of February’s I AM initiative, performance group First Wave from the University of Wisconsin at Madison hit the stage last Friday to spread a message about identity and self love. The group also hosted a variety of workshops concerning poetry, music performance, and identity.

According to the school’s office of Multicultural Arts Initiatives, First Wave is a scholarship program at UW-Madison which offers students full tuition and an opportunity to “develop their craft as part of a high-level artistic community” in exchange for “engaging the community in creative service-learning projects that combine multicultural arts and activism.” Students showcase their art, whether it be poetry, music, dance, or visual arts, around campus, the country, and even around the world. A sampling of the group’s talents was showcased during two in-school performances in which four members of the performance group shared their music and spoken word with MV students. These performances, which took place during fourth and fifth periods, highlighted topics such as materialism, self appreciation, and acceptance, and what the true components of one’s identity should, or should not, be.

“I just enjoy creative writing in general. It started off being a pace poet, just writing poems in my notebook, and then it moved to doing things more verbally, which is spoken word poetry. Then I got into hip-hop, and I started writing my own rhymes back in middle school,” First Wave performer Ricardo Cortez de Cruz said.

After their inspiring performances, members of the group, along with their director, hosted three different workshops, which were available to both classes and individual students during sixth, seventh, and eighth periods, about each of their distinct crafts. A lesson in expressing ideas through music, a workshop on the development of personal identity, and Drakespeare, an analyzation of both poetry and music by Drake, were offered. In each workshop, personal expression and the importance of words and written art was strongly emphasized.

“The reason why I like doing these workshops is because I just like connecting with people; I think people serve as a big inspiration for me and my writing in general. There’s so many stories that people hold and sometimes you can connect with those stories and write your own,” de Cruz said.

There are many more events planned for the month of February to celebrate the I AM initiative. Don’t miss “Food and Feminism” hosted by the Feminist Society after school this upcoming Thursday, as well as “From the City to the Suburbs”, a session available during lunch periods on Friday. I AM monologues will take place next Tuesday in the Black Box, followed by Latin Night on Feb. 26.