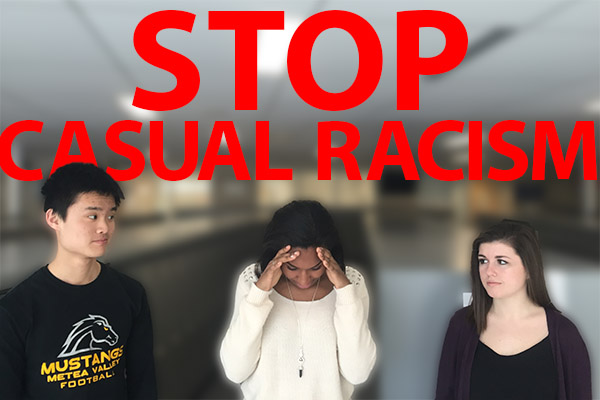 But it always has been for me.

As a senior, I was asked on a college essay to describe a problem I’d like to solve – and that is exactly how I started it.

This isn’t an article on ending racism or stopping discrimination as a whole. This is me telling my story and thoughts about a problem I deal with just about every day of my life: casual racism.

The definition of casual racism “refers to conduct involving negative stereotypes or prejudices about people on the basis of race, colour or ethnicity. Examples include jokes, off-handed comments, and exclusion of people from social situations on the basis of race,” according to an Australian Human Rights Commission article.

Specifically, it is the everyday comments like, “you’re pretty for a black girl” or “you run fast because you’re black,” that get me thinking about how easy and nonchalant this form of racism is to come across.

Since I was born and raised in primarily white suburban neighborhoods, a wide majority of my friends are white, but not all, they are just the people I found it most easily to assimilate with. My friend base was built around personality and not what I looked like, yet I was always just seen as the well-brought-up “black girl” to those who didn’t thoroughly know me. I constantly get referred to as “white,” not only by white people, but by people of all races.

But, why is the standard of what a proper young girl should be like derived from what a normal white girl is like?

Since the sixth grade, every accomplishment I made was followed with a comment from my peers on my race. Getting moved to the varsity volleyball team as a freshman was countered with “it’s because you’re black, so you jump high”. Being named an Indian Prairie Scholar was paired with “I know you’re black, but you’re smart.” But, why is the standard of being successful so much lower for black students than it is for white students?

It is the root of these naive jokes/comments that make them hurtful and racist. Since slavery, African Americans have been stereotyped, discriminated against, and beaten down by words of other races. By normalizing stereotypical comments, the only thing being done is strengthening the desire and ability to discriminate against different races. Casual racism leads to subconscious racism, which will eventually develop and show through people’s actions. Actions like throwing around the n-word just because people don’t expect me to get offended by it since I am considered “white.” These words offend people, and contribute to the advancement of racism for future generations.

Casually racist remarks from my peers and even close friends have taken the place of congratulatory expressions, and that is what is so unsettling about this “friendly” form of prejudice. Older minority generations worked hard to be successful and to raise their children to overcome stereotypes/preconceived notions, not to be compared to another race.

Through my personal experiences, I hope to open people’s eyes to how uncasual casual racism truly is. My call to action is to seek to encourage both men and women of different ethnicities who’ve dealt with casual racism is to believe that the difference they are making in the world means something despite prejudice from others. I encourage you all to shape your actions around shaking stereotypes and defeating personal preconceptions of success based on race by leading through example. And for those of us who unconsciously make racist comments, stop yourself and be the change by making others aware of casual racism to all races.