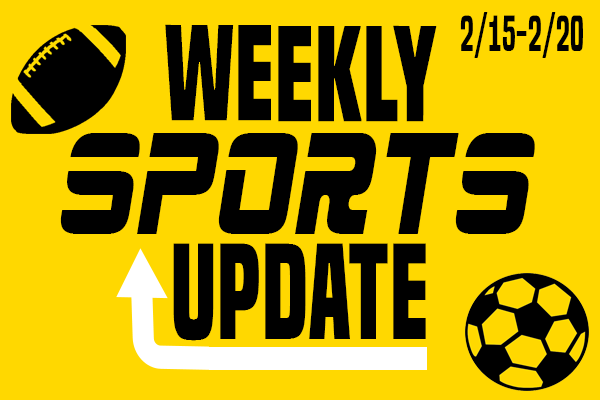 The boys’ basketball finished their season this past week. On Tuesday, the Mustangs lost 54-68 to Wheaton Warrenville South. Junior Jeremy Hunter finished the game with a team high 19 points. On senior night this past Friday, the boys defeated Glenbard North in dramatic fashion, winning 78-77.  Overall, the team finished 13-15 in the regular season. Coach Vozza and the team will travel to Glenbard East to face Glenbard North in their first playoff game in a rematch of Friday night’s epic game.
By Nirmal Mulaikal
Sports Editor
Wrestling

For the first time in history, wrestling made it to the IHSA State finals thanks to senior Dylan Ervin. Wrestling in the 195 lb weight class, Ervin placed second in the state (3A) defeating Erick Cole of Rock Island HS, Kendale Cole of Oak Park HS, and Mason Delong of Bradley HS, setting him up for the finals against Christian Brunner of Carpentersville HS. “It’s such a blessing. It’s an unreal feeling. All the hard work I’ve put into the sport has finally paid off,” Ervin said about making history Metea. Congratulations to all the wrestlers on an amazing season!

The boys’ swimming team made a huge splash at sectionals this past weekend, placing third overall and making program history by sending a record nine people in seven different events to state. The state bound qualifiers include the 200 medley relay team with Michael Chan, Janssen Gamilla, Alex Dillmann, and Cam Gidlow, Kevin Kluge in the 200 free, Robert Wang in the 200 IM, both Dillmann and Gamilla in the 100 fly, Kluge in the 500 free, Wang and Connor Mitsch in the 100 back, and the 400 free relay team with Kluge, Dillmann, John Tjards, and Wang. Wish the swimmers the best of luck in the state meet next weekend!
By Lucas Rhamy
Sports Writer
Girls’ Bowling

This week, Alexis Sutherland represented the Mustangs in the IHSA state tournament. She finished 39th in the state, and as one of the top six underclassmen. She will be one of the top returning players for next year.
By Qiyuan Zhou
Graphics
Girls’ Basketball

This week, the Mustangs competed in their first, and last, regional game. A close one point defeat to Joliet West ended their season. “Overall it was a fun last season,” senior Cheynne Krehl said. “We had a lot of obstacles to overcome but we stuck together as a team and we grew as a team and individuals.” Just a few of the team’s many achievements this season include defeating rival Neuqua Valley and winning against Wheaton Warrenville South on Senior Night.