Students discuss the use of the ‘N’ word 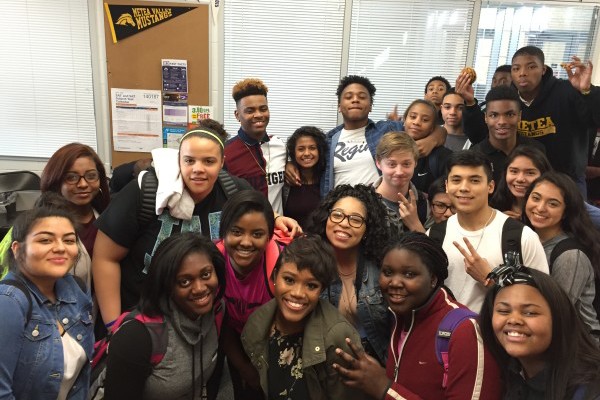 Students gathered in the College and Career Center during all four lunch periods last Friday to discuss a topic at the center of popular culture and the minds of many of today’s youth: the use of the ‘N’ word. An idea that blossomed out of the “Stomp the ‘R’ word” initiative that has had enormous success among the student body, this open forum was designed by Dean Jennifer Rowe, I AM sponsor Robyn West, and junior Decarah Myers in order to facilitate conversation among students about the use of the ‘N’ word with the ultimate goal of ending its popular use.

As the circle of students widened with the arrival of more participants, opinions and stances ranged among students. Some felt that the word had become a term of endearment, something that had been transformed from something horrible, hate-filled, and ugly, into something unifying because of its new form and context of use. What in the past was used to degrade, has now, in the opinion of some, become a term used to signify a common bond.

Others felt that it’s time to move past that word, and that it’s much better buried in the past than it is resurrected in the present; there may be some better words for the space that the ‘N’ word would occupy. “The more we progress, the more words we learn, that word begins to fade,” junior Malik Johnson said.

Some students felt that the weight and connotation of the word depended entirely upon the circumstance in which it was used, and the speaker who had used it. “The power is in the context,” senior Jalen Tutt said.

In all accounts, the word was believed to be powerful.

Because of the word’s roots, most students agreed that it’s always going to be offensive to more than just a few people, and it’s a delicate situation. “People can change the meaning of the word, but the original meaning will never go away,” West said.