Leap Day marks a rare, special day in history and in the lives of many 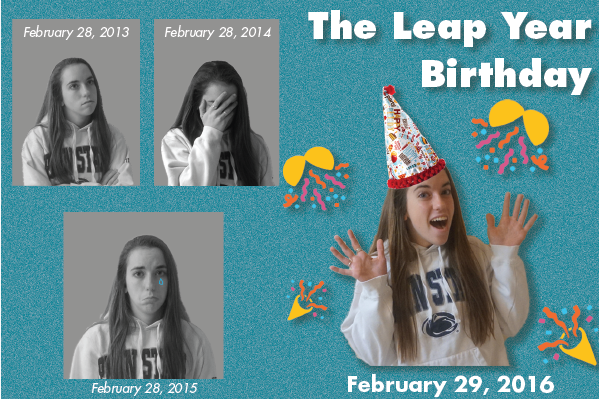 I woke up this morning to a peculiar site: a birthday card, displaying a glittering red number four on my kitchen table. Considering the youngest person in my house is about to turn sixteen, this may not make much sense to a regular family, but I wasn’t fazed. My younger brother, Derek, was born today on February 29, better known as Leap Day. Derek is just one of the estimated four million people worldwide who were born on this date which occurs once every four years, meaning that although my brother is sixteen, he is only celebrating his fourth birthday.

So what is Leap Day, anyways, and why don’t we have a February 29th every year? The answer to that lies in the stars-literally. According to cleveland.com, “It takes the Earth approximately 365.242189 days – or 365 days, 5 hours, 48 minutes, and 45 seconds – to circle once around the Sun. This called a tropical year. Without an extra day on February 29 nearly every four years, we would lose almost six hours every year. After only 100 years, our calendar would be off by approximately 24 days.” Prior to dictator Julius Caesar’s rule of Rome, an extra month was inserted into the calendar year every so often to attempt to combat any disorientation caused by the Earth’s orbit. This proved to be quite unsuccessful. To align the calendar months with the seasons, Julius Caesar proposed to add an extra day to every four years to resolve any discrepancies between the solar and lunar calendars. This is the most logical explanation as to why we have an extra day tacked onto our calendars every four years, but it’s not the only one.

British mythology holds that St. Bridget once complained to St. Patrick that women were unable to propose marriage to men. St. Patrick allowed women one day, Leap Day, to propose to their male counterparts. It is hypothesized that this legend led to the concept of Sadies Hawkins Day in the United States, as well as Sadie Hawkins dances.

Leap Day also carries its superstitions. According to Greek tradition, marrying in a Leap Year carries bad luck for the marriage. History.com estimates that one in five Greek couples avoid planning their weddings during a Leap Year, prefering to prolong their engagement and marry in a year of better luck. Additionally, the first warrants for the arrest of witches in Salem were issued on February 29, 1692.

Let’s shift our sights to the present day. Although Leap Day birthdays have always seemed usual to me since there’s one celebrated in my family, on the contrary, they’re actually a rarity. Just 1 in 1,416 babies are born on a Leap Day. In my family, Derek’s birthday has always been celebrated on February 28, the day before his actual birthday would take place during a Leap Year. Other Leap Day babies celebrate differently.

“I celebrate the entire month of February,” Leap Day baby Jacqui Erwin, parent of a Metea student, said. And why shouldn’t she, when three-fourths of her birthdays can never be properly celebrated?

Both Leap Day babies explained their favorite, and least favorite parts of being born on such a rare occasion, and if they had anything special planned for the Leap Year.

“I like the jokes about my age, not having a birthday, and when I can get my license. I don’t have anything special planned for this year, but I am excited to get my license on my real birthday,” sophomore Derek Roberts said. “Most people believe me when I tell them my birthday is on Leap Day, but they definitely are shocked and ask me a lot of questions, which I find annoying.”

“The best part is that I age a little more slowly than the rest. The worst is when I go to enter my birthday online, like for a rewards program, and I am told the date doesn’t exist,” Erwin said.