Warriors and Tomahawks team up for an exciting night of hockey 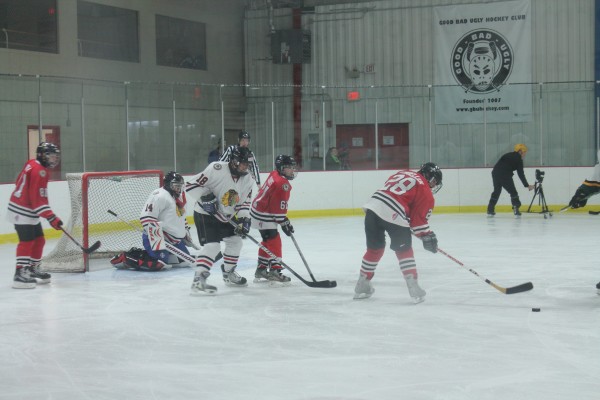 The Warriors hockey team played the Chicago Blackhawks special hockey team, the Tomahawks, Sunday night at a packed All Seasons Ice Arena. The stands were full of cheering fans for both teams and many photographers were on the glass and even on the ice waiting for the exciting game to start. The game was a battle between the black jersey team and the white jersey team. Both teams were made up of half Tomahawk players and half junior varsity players.

Both teams thoroughly enjoyed the experience and you could see the excitement in the both the players’ and fans’ eyes. As they were getting off, Tomahawk player Cole Paravola enjoyed his experience playing with the Warriors. “It’s really fun, we liked it a lot,” Paravola said.

Not only did the Tomahawks enjoy the experience, but the Warriors did as well. “It was really fun to see all the smiles and everyone helping each other out just to have fun,” senior Warrior Mitch Collins said.

There were three periods, the first was thirty minutes, the second served as a sort of an intramural and was only 10 minutes long, and the third and final period was 30 minutes.

The Warriors and Tomahawks worked together on each team to score during the first period, but the period ended with the white team up 4-2.

Then during the second period, the Warriors on both sides played each other rather than a mix of all players, it was a hard fought 10 minutes for both teams but neither side scored.

Finally during the third period both sides were still playing hard to get the win. One team would score and the other would come right back and score. Two players, one on the white team and one on the red team had hat tricks, or three goals. And in the final four minutes of play, all players stormed the ice to finish off the game. But overall the game ended with a victory for the white team, who won 7-5.