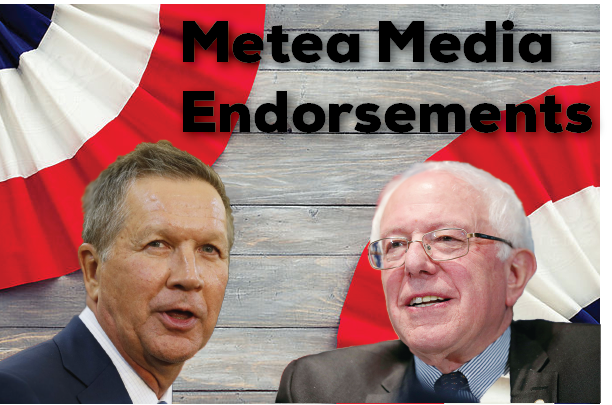 By The Stampede Editorial Board
Graphic by Qiyuan Zhou

The whirlwind that is the 2016 election will roll into the state of Illinois on this upcoming “Mega Tuesday” as NPR has dubbed it, where 1,159 delegates will be at stake for both parties’ candidates. For GOP voters, this is an interesting election cycle to say the least; like so many of you, the chaos of the current state of the Republican party has rattled conservative members of The Stampede’s editorial board.

Our current Republican front runner, Donald Trump has led this charge. Making scapegoats of minorities, specifically Mexicans and Muslims, Trump has coined a campaign reminiscent of, as Republican candidate Marco Rubio put it in a New York Times interview, “third world strong-men.” Yet despite the antics, Trump seems to be tapping into the uneasy and dissatisfied feelings of many Republican voters. Granted, Trump has genuine experience and success in the field of business and would bring a certain amount of expertise to the office, but his foreseeable talent in economics is not enough for us to overlook his explosive divisiveness in terms of politics and personality.

Thanks to his comparatively large following, Trump is holding the Republican lead with 460 delegates. Not far behind, however, is Republican candidate Ted Cruz with 370 delegates. Cruz is, in many ways, the more mild-flavored Trump, and perhaps that is the strongest argument in his favor at this point. With a similar ability to tap into the anger and fear of voters, Cruz offers a more digestible option. But we’re comparing two options here that are still on the rather extreme side; whether it’s Trump or Cruz, don’t expect to see any compromise with them in office. These “new age” candidates, the candidates that aspire to move past traditional establishment politics, will keep alive and well the classic congressional gridlock that we’ve come to expect.

If you’re going for a more moderate candidate (though being moderate on the Republican spectrum means something very different from being moderate on the broad spectrum that includes all parties), there’s always Rubio. Rubio currently holds third place with 163 delegates, and is much more unifying than Cruz or Trump have a prayer to be. With more than satisfactory foreign affairs knowledge and a tax plan that looks promising (featuring Senator Mike Lee) and could provide relief to the middle class, Rubio is, in our opinion, leaps and bounds ahead of Cruz or Trump in terms of electability in a primary. But he has, unfortunately, sunk to the mud much like Cruz and Trump. Although he has certainly not done so as often, he has nonetheless proven to be capable of sinking to the level of divisiveness that Cruz and Trump are consistently capable of. That scares us.

With such a disconnect between leading candidates in the Republican party, and to a larger degree, a disconnect between Republicans and Democrats, we can’t afford a divisive Republican nominee. We need someone calm, collected, and capable of compromising to get things done for America while retaining Republican values. The only candidate capable of doing this is Republican candidate John Kasich. Kasich, throughout his campaign, has refused to stoop to the radical level of his fellow Republican candidates, and he has held the moral high ground throughout. His message has been an uplifting one, rather than a depressing message that preys on fear and unrest. He has acknowledged all of the negative feelings that many Republican voters have experienced, but has encouraged them to subscribe to an inspiring message that suggests that America has never stopped being great, we only have to continue to ascend. It’s been more than just inspiration, though; Kasich has proven that he knows what he’s doing.

As Governor of Ohio he has created more than 300,000 jobs, lowered the unemployment rate below the national average, and raised Ohio’s rainy-day fund from 89 cents to more than $2 billion. This means that Kasich took Ohio from a budget deficit of $8 billion to a surplus of $2 billion. He has done it for Ohio, and he has a national plan as well. Kasich has created a comprehensive plan to balance the government’s budget. Though it will take a long time, he plans to amend the Constitution to require a balanced budget, which means government expenditures would equal revenue. Balancing the budget would entail a year-long freeze on all government spending except for military defense and making tax cuts for businesses and the wealthy. His initiative could balance America’s budget and revive the economy for the first time since Bill Clinton’s presidency.

While Kasich takes a more moderate approach on immigration reform and maintains a desire for moderate paths to citizenship, he hasn’t compromised many values that Republicans hold near and dear. He has an aggressive plan for rooting out terrorists, defends the Second Amendment fiercely maintaining an ‘A’ rating from the NRA, opposes the legalization of marijuana, opposes abortion except for in extenuating circumstances such as incest or rape, and favors tax cuts.

Kasich is the only candidate in the Republican race that could foreseeably unify this country, and could maintain bipartisan relationships and interactions. He is exactly what the party needs right now. But this could be voters’ last chance to put Kasich in good standing. This Tuesday could narrow the field, and that could mean Kasich dropping out of the race. In Illinois, he will need a big turnout to have a chance. If you are a Republican or moderate that wants to witness the restoration of the Republican party, support Kasich this Tuesday.

We will. The Stampede chooses to endorse Ohio Governor and Republican candidate John Kasich for the Republican nominee.

In an election season marred by new-aged politics, a gridlocked Congress, and millionaires fighting millionaires, we as Americans have seen some of the most outlandish politicians that this country has to offer. However, outlandish is not always synonymous with incompetent. Vermont Senator Bernie Sanders has run a campaign for the ages, and though Sanders is repeatedly scoffed at for having too much faith without enough plans, Sanders shows presidential potential in more ways than one. Because of his promise as a great candidate, The Stampede has decided to endorse Sanders for the democratic nominee.

It’s very well circulated that Bernie Sanders does not believe in using political action committees (PACs) and Super PACs to fund his campaign. In an article published by the New York Times in February 2016, Sanders had raised the third most amount of campaign funds, all without the help of any PACs. The fact that he has so much of the people’s support is reassuring, and it also means that his motives are not fed by any corporations or businesses. Sanders is also known for being somewhat of a “grumpy grandpa,” but there’s a reason that we all love it: Sanders really cares. Unlike some candidates who yell to be the loudest, or because they’re angry at other candidates, Sanders will yell because he cares about the issues he talks about. That kind of sincerity is new to a presidential candidacy race.

With such progressive platforms about the issues that the coming generations face, Sanders has understandably become the voice of young people today. Issues such as civil rights, climate change, and college affordability are at the forefront of Sander’s agenda, and thought his spending plan may be risky, his socialist approach is a breath of fresh air from the more traditional candidates. As long as his platform is updated and in touch with the stances that the people want to hear, Sanders is the best democratic candidate to put socially progressive policies in action.

Though Sanders can bend to match the times, he is not one to change his mind on a stance he truly believes in. In 1963, Sanders was arrested for protesting outside of segregated schools, and has been an avid supporter of civil rights since. He is also known for his passion towards health care, and he’s also well versed in the matter, this proved by the circulating video of Hillary Clinton thanking Sanders at an event in which he was standing just over her shoulders. All in all, Sanders does not give up on an issue once he’s started with it, and in the President’s office, he can tackle the issues pressing America today.

Sanders does have some work to do: he promises the miracles we all hope for, but he has shown very little evidence to back himself up. However, if he can put a plan of action out for all of the voters to see, he could receive the democratic nominee and become the next leader of America.