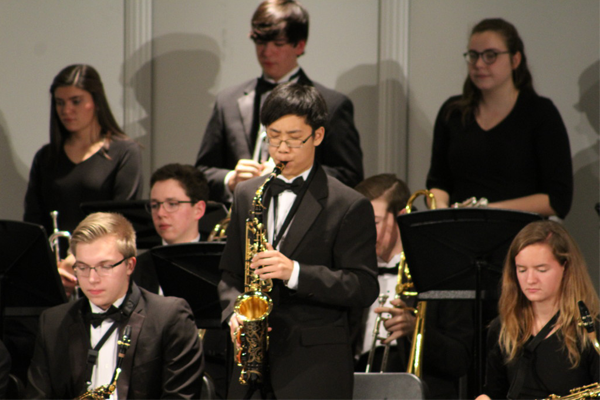 By Drew Danko
Online Editor
Photos by The Stampede

The music department sent out an e-mail to its students Thursday night, asking them to report to the auditorium for a special surprise Friday morning. When students arrived, music department chair Don Devany and his colleagues were proud to announce that the program was one of three in the nation to win the top Grammy Signature Schools Gold Award. Along with the incredible award, the program won a $3,500 grant. 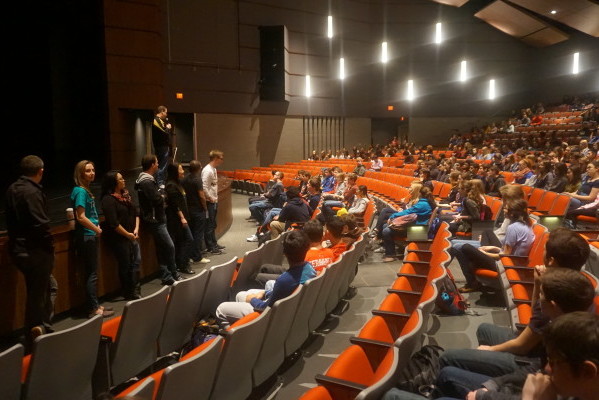 Music department chair Don Devany believed this award was a reflection of the work students and music educators in our district have put in since kindergarten. “I think everyone is excited, as I mentioned to the students, it represents the work they really started in kindergarten and have continued here in high school. The great work that all of our students and teachers do in kindergarten to fifth grade in general music and sixth grade through eighth grade in their middle school,” Devany said. “We get to continue it here at the high school and the award recognizes the top high schools, but it’s really a sign of what we do here as a whole district.”

In December, it was announced that the program had been named a semi-finalist alongside 118 other high schools across the nation that have demonstrated musical excellence. This was the program’s fifth time applying for the award. The detailed application requires information about the school, resources within the music department, and the literature that is performed and learned. “In December, we compiled 16 recordings of pieces that were performed during 2015 and they’re 1:15 clips. There is four categories: choir, orchestra, band, and an ‘other’ category. That all gets submitted with a representation of our programs that were performed, so we list all the literature from the year that we have performed,” Devany added.

The music department was selected from individuals from the Grammy foundation as well as some of the top music educators in the country and the world. The department submitted pieces from the Chamber singers, Treble singers, Chamber strings and winds, wind ensemble, Steel band, jazz ensemble, and the male acapella group, Apollo. These groups include the top musicians performing at the highest level of musical rigor. “[Winning the Grammy] took a lot of practice and discipline. We had to work hard on perfect technique so that we sounded our best,” senior Chamber strings member Isabel Lohman said.

Moran credited the recognition to the perseverance of the members of the program and the teachers. “The teachers in the music department do not give up on us. We’re always trying our best and they’re pushing us to be the best we can be,” Moran added.

Sophomore Kristen Moy, a member of Chamber strings, also credits the teachers for their hard work and encouraging students to be passionate about music. “The teachers have a passion for the music that a lot of us haven’t discovered yet. So when they bring that passion to class every day, it drives the whole class together and inspires us,” Moy said.

A Grammy representative will attend either a spring concert or the Music Awards Night to present the Grammy to the music department. Devany believes this award is tangible evidence of the hard work that everyone in the department has contributed to make it such a success. “It’s really hard to have something tangible that says it is great, you just feel it’s great. For someone like the Grammys to say what you’re feeling is right, it not only affirms what we’re doing here at Metea, it will continue to elevate us even more,” Devany added.