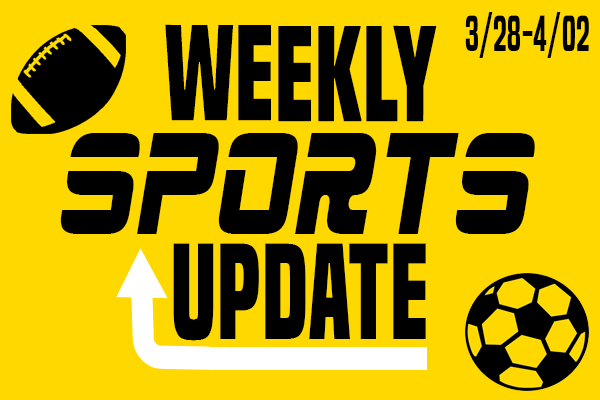 Boys Water Polo: The boys water polo will continue where they left off before Spring Break, facing St. Charles North on Wednesday and travelling to the Niles Varsity Tournament this upcoming weekend. With a 6-7 record, the team looks to make great strides during their upcoming matches.
By Nirmal Mulaikal
Sports Editor
Girls’ Track & Field

As the weather gets nicer and winter is finally in the past, the boys track and field team is transitioning from the indoor portion of the season to the outdoor portion. However, the team went out on a high note as they competed in the Illinois Top Times meet this past week. Placements include Amiri Finner taking 6th place in the long jump, Jordan Cagigal taking second in the 400m, and the 4x800m relay team including Cagigal, Ben Piotrowski, Derek Roberts, and Charlie Schafer taking 3rd place overall.
By Lucas Rhamy
Sports Writer
Girls’ Lacrosse

After an uneventful spring break, Tribe Lacrosse will take on Plano this Tuesday, followed by a home game against Wheaton United this Wednesday. Saturday, the girls will play Benet Academy at Benedictine University.
By Nikki Roberts
Online Writer
Girls’ Soccer

Girls’ soccer started off a busy week by tying a competitive Lyons Township 3-3 last Tuesday at home. Thursday, they travelled to St. Louis, Mo. to play in the Parkway Showcase. They started the tournament Friday by tieing Eureka (Mo.) 0-0. However, they lost 1-4 to Summit (Mo.) on Saturday. “Out of state tournaments give us an opportunity to have some bonding time as a team, while also improving our soccer and trying new things in out of conference games that aren’t quite as important as DVC games,” senior defender Megan Morris said.
By Drew Danko
Online Editor
Boys’ Baseball

Over break, the Mustangs played four games, winning against Bartlett 14-1, Proviso West 14-1, and splitting with Westmont, winning one game 20-1 and losing one game 9-10. Senior Anthony Greco had four home runs, Blake Honda with one home run, and valuable plays made by Ashton Creal and Conner Lovely. “We’ve started off really hot at the plate. We just need to keep building off this early success,” said Lovely. This week, they will take on Oswego East, Neuqua Valley, and Yorkville.

Girls’ badminton spent no days off during spring break, as they finished first for the fourth year in a row at the Plainfield North tournament Saturday. Girija Vaidya and Allison Yu were double champions; Asha Kondura and Iris Xu finished second; and Chloe Kessler and Caroline Baik also finished second. The team finished second at the Hinsdale South Invitational March 26. “I think it was a good tournament for MV because we all went to finals, and it helped us find and fix our weaknesses. For me and my partner personally, it was awesome because we’ve placed first three years in a row,” Vaidya said.
By Drew Danko
Online Editor