Metea’s Group Interpretation production of “She’s the Man” traveled to Springfield to compete in the State competition this past weekend.

Group Interpretation (frequently referred to as GI) is an IHSA competition in which each school performs a 30 minute adaption of a story; usually a film, play, or book. GI’s are different than usual theatre performances, however. They have to put up and take down their own stages, and can not utilize typical theatrical elements, such as costumes or sets, which makes the performances very unique.

“She’s the Man” was an especially unique production for the Group Interpretation team, because it is so different than previous years.

“This GI was more comedic than some other ones that we’ve done in the past, so we had a lot of enthusiasm from the cast and audience,” junior and Group Interpretation member Ethan St. Germain said. “Every member of GI used their own elements of humor and spice, which made the show so funny.”

Another aspect of Group Interpretation is that the cast members make the set pieces out of their bodies. They spend a lot of rehearsal time working on crafting themselves into the set, and creating “pictures” out of the scenes to make them as interesting and visually appealing as possible. In She’s the Man, actors were showcased as anything from doors, to a lava lamp, to a leg press.

“The kids on the team were so dedicated to making this show great, and a lot of the ideas for pictures came from the team,” Taylor Moran, one of the captains of the team, said. “The group’s energy and excitement about doing this show is part of what made it a huge success.”

After placing third at Sectionals, GI advanced to the State competition in Springfield the first weekend of April. Teams are given a score during prelims, and then ranked overall based on the score. The team competed first thing in the morning on Friday, April 1, and finished 14th in the state. 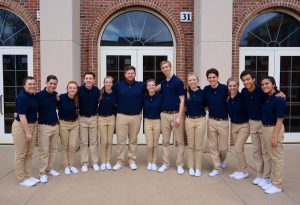