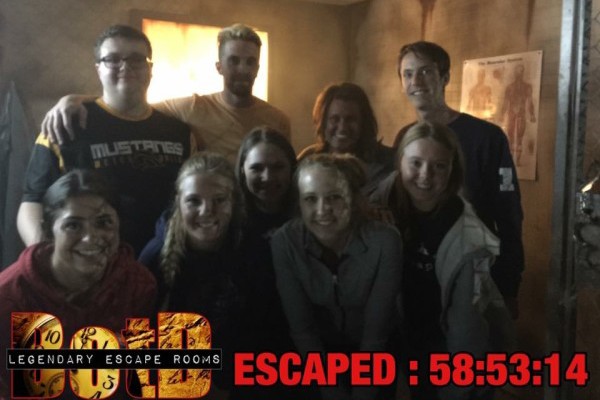 Tick-tock, tick-tock. Sunday, a group of my friends and I raced against the clock to use clues and get out of the puzzle and new trend that is an escape room. Currently, Aurora’s Basement of the Dead is curating an escape room called Dr. Trauma’s Medical Room, where we were challenged to find four fake body parts that would help crack the code and unlock the door.

In an escape room, you are locked in with other participants and have to use clues scattered throughout the room to find your way out. “You’re trying to figure your way out in a certain amount of time. The clues, riddles, and whatever you have are the keys to getting out,” Basement of the Dead employee Dan Davis said.

Like most other escape rooms across the country and world, Dr. Trauma’s allows one hour for a group of up to 10 people to work together to uncover clues, keys, and items that help to escape the room.

Escape rooms originated in Japan a few years ago and have since spread into the U.S.. Basement of the Dead opened its first escape room in late 2015. “It was a trend online when it first started in Japan; it was an online escape room video game. It has started to pick up in the U.S., people enjoy outside of the box thinking,” Davis said.

While some escape rooms have a lighter theme, Basement of the Dead’s escape room theme is more horror and scary to go along with its haunted houses. In its current room, participants want to escape before Dr. Trauma has the chance to harvest their organs. “Some escape rooms are more of a history buff, some are more of a fun, interactive carnival game, and Basement of the Dead’s has more of a horror theme to it. It’s for people who like haunted houses and horror themes, that is our signature way,” Davis said.

Yes, racing against time to keep your heart, brain, liver, and other vital organs might sound scary, but the escape room is not as scary as it might sound. Despite the darkness and disfigured mannequins, even the most easily frightened could handle searching through the room for clues.

At first, I was a little discouraged because finding the first clue was difficult, but this forced my teammates and I to communicate with each other. An escape room called Real Escape Game in San Francisco has hosted companies like Facebook, Google, and Twitter to promote team building and communication for employees. “It improves communication with others. If you’re shy but really smart, they can start talking to people,” Davis said.

English teacher Sarah Depasquale agreed that the escape room was a fun, helpful team building activity. “It was a really good team building activity. I think it would be great to do with colleagues or coworkers. You were forced to work together with who you were with and you’re working on puzzles that are relatively difficult, you have to rely on your own knowledge and the people you were with,” Depasquale said. “It was good for some laughs and critical thinking.”

We chose to do the escape room at the normal level, which allows three hints throughout the hour to help you figure out how to escape. For veteran escapees, the expert level provides no hints for visitors. Even though some clues were difficult to figure out, once you start getting more and more clues, it encourages you to keep going to solve the puzzle. It is high energy and fast paced, which makes it very exciting and keeps you occupied for as long as it takes you to escape. We got out just before the 59th minute.

Isabel Poruba did not believe you have to be a veteran or highly intelligent to enjoy the escape room. “You don’t have to be smart, escape rooms are about knowing what to look for, not overthinking the clues,” Poruba said.

For the future, instead of going to the movies or bowling, I think an escape room would be a fun thing to do with friends. It doesn’t take a ton of brains, and you’re stuck in a room without cell phones for an hour, so you can only spend time with the people you are with. It’s a great social option for people who like communicating, critical thinking, or solving mysteries and challenges.

Most escape rooms rotate or change their theme, to bring back people who have tried them before or appeal to different people. Basement of the Dead will host its Dr. Trauma room until it opens its new room this summer. “”Version two will be Dr. Trauma’s revenge in a more intense atmosphere to bring people back to the same room,” Davis said. Even though $30 per ticket might be expensive, it is worth the fun times you will experience with your friends, family, or peers.