Why Hillary Isn’t Entitled to my Vote: My Growing Frustrations With the ‘Democratic’ Party 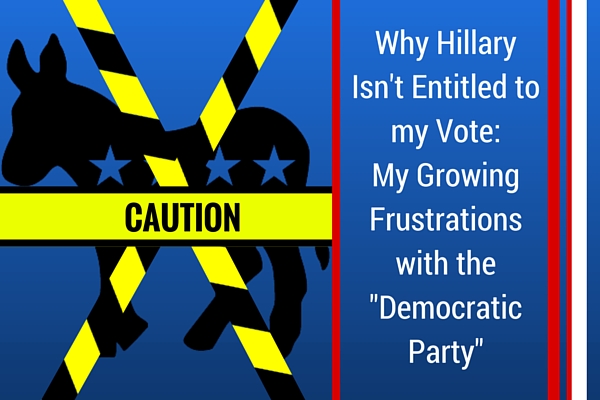 Barring a few Sanders upsets in states like New York and Pennsylvania, Clinton is poised to win the Democratic nomination. Throughout the primary season, many Bernie Sanders supporters have started to dislike Hillary Clinton, and either refuse to vote or vote third party in the general election if she wins the nomination. An NBC/WSJ poll in March showed 33 percent of Sanders supporters refuse to vote for Clinton in the general if she wins. It’s a growing movement titled as #Bernieorbust, and has drawn attention from celebrities like Susan Sarandon and Bill Maher, with mixed reception. The notion of not voting for Hillary has been met with criticism that this discourages party unity and could damage the Democratic party. In fact, Clinton’s campaign stated after Sanders’ win in Wisconsin that its plan is to “Disqualify [Sanders], defeat him, and unify the party later.”

After a week of Clinton claiming New York guns mainly come from Vermont, feeling “sorry” for all the young people that support Sanders over her, and even resorting to blaming him for the Sandy Hook tragedy, she expects Sanders supporters to like her, and wants to “unify the party.”

Wait, what? Did I hear that correctly?

Yes, one of the least likable candidates in the race who unjustly attacks and slanders everyone in their way expects you to vote for her in November. If you ask me, I’m not voting for a candidate who ignores me, resorts to mudslinging, and takes millions from everything that doesn’t represent me, like the fossil fuel industry, pharmaceutical industry, and Goldman Sachs. I don’t “vote blue no matter who,” I vote based on a candidate’s policy and character, and Hillary does not live up to my requirements.

But the issue of #Bernieorbust goes past what just Clinton does or says. Many Sanders supporters have criticized the Democratic National Convention (or DNC) heavily, accusing them of rigging the system in Clinton’s favor, and turning a blind eye to her dirty tricks.

One of the largest discussed examples of DNC corruption is the very concept of superdelegates. Superdelegates are elected officials who don’t have to vote with how their states vote when it comes to selecting the Democratic nominee. Yes, I know why superdelegates were created in the 1970s, but it’s outdated, and still an undemocratic process. One notable example of superdelegates voting against the people’s will was the New Hampshire primary. Bernie Sanders got 60.4 percent of the vote to Hillary Clinton’s 38 percent, and as a result, Sanders got 15 delegates to Clinton’s nine. But six of eight New Hampshire superdelegates (two are still uncommitted) backed Clinton, meaning that Sanders tied Clinton in New Hampshire despite getting 22.4 percent more of the vote. There have been countless states where Sanders has gotten at least 70 percent of the vote, but superdelegates still back Clinton. When CNN’s Jake Tapper asked after the New Hampshire primary why superdelegates existed, DNC chairwoman Debbie Wasserman-Schultz stated “Unpledged delegates exist really to make sure that party leaders and elected officials don’t have to be in a position where they are running against grass-roots activists.” If you didn’t get what she meant, she meant that superdelegates are a system put in place to prevent candidates that are actually supported by the people, and instead keep the current system in place that’ll never listen to you. And guess what? If candidates supported by the Democratic establishment continue to win because of this system, Sanders supporters will never get the campaign finance reform they desire. Clinton has no motive to change campaign finance rules when she benefits the most from it, considering she’s raised $55 million dollars in SuperPAC money. Clinton’s campaign even had the nerve to accuse Sanders of “rigging the system” when it came to superdelegates, despite the fact that Clinton had hundreds backing her months before she even announced her run for president, something that would be unheard of in any other developed country. The more I talk about the rigged process, the harder it is to wrap my head around why anyone supporting Sanders would be willing to vote for Clinton come November. She represents everything Sanders supporters fight against.

Both the DNC and Hillary Clinton’s campaign have also turned a blind eye to all the voting issues Independents and Democrats have faced in the primary process. The Democratic Party often prides themselves on opposing voter suppression, but after this election cycle, it’s clear the Republican and Democrat establishments are two sides of the same coin. Voting suppression happens in many forms, such as strict voting laws, very specific requirements, voter intimidation, or sometimes directly throwing votes in the trash, which was something a Hillary representative was caught doing in the Hawaii caucuses. Suspicious acts have been committed all election cycle that have affected both parties, such as Arizona’s Maricopa County closing dozens of polling booths resulting in five hour long lines. Just take a second to imagine what waiting in a line for five hours in humid weather feels like. Would you stay in line? That was an issue that affected everyone of both parties in Arizona, but what about the other unexplained incidents? Like Democrats mysteriously having their party identification changed days before a closed primary like New York or Arizona occurs. Or Bill Clinton blocking off access to polling stations in Massachusetts. Or Clinton getting a mysteriously high amount of absentee ballots from nursing homes. To clarify what I mean by that, there have been multiple instances in caucuses where hundreds of absentee/surrogate ballots from nursing homes are shipped in. This is done by SuperPACs sending mail-in absentee/surrogate ballots to nursing homes telling them to vote for a candidate (Clinton), and paying for the return postage. There have been reports of caucus sites in Wyoming and Nebraska where Sanders supporters outnumber Clinton’s 200-10, but the Clinton supporters coincidentally have upwards of 300 surrogate ballots with them, leading to a Clinton victory. This method is called “granny farming,” which is illegal in places like the United Kingdom. So if you’re wondering where Clinton’s 2 million vote lead comes from, it’s likely mainly from nursing homes where Clinton sends hundreds of absentee ballots for elders to fill out. Issues like these are normally issues the Democrats stand up against, but they refuse to even recognize these voting issues, largely due to the fact that Clinton has benefited largely from voter suppression in the primaries. The fact that you had to change your registration status to Democratic six months before the New York primary, before the first Democratic debate even happened, is ridiculous. The DNC have hand-picked their candidates for years, and don’t want any of you getting in their way. I can’t believe there was a time I believed the DNC would be above the Republican National Committee, but with both parties corrupt to the core, something has to change, which includes who you vote for.

Look, I get that some Sanders supporters still want to vote for Clinton because she’s the “better of two evils,” and “at least she’s better than Trump.” The issue is, she takes as much corporate money and is just as corrupt and manipulative as any Republican nominee, if not more. To vote for Clinton in November would be to go against Sanders’ ideals of fighting the corrupt politicians who take corporate money. To vote for Clinton would be to not only accept, but reward the DNC for contributing to the issue that is our undemocratic process. You’d be contributing to the problem that is the two-party system, and you’re better off voting third party to preserve your dignity. I’d argue Trump supporters should give the RNC the same treatment if they undemocratically steal the nomination from him in a brokered convention. Whether you agree with Trump or not doesn’t change the fact that the process is rigged against him too in a similar manner.

Sorry Hillary, sorry Debbie Wasserman-Schultz, and sorry DNC, but I’m not going to reward you for rigging the system, alienating the people that once supported you, and turning a blind eye to fraudulent tactics. I don’t think my family is interested in voting for whoever the Republican nominee is, but one thing’s for sure: They definitely aren’t voting for Hillary Clinton.