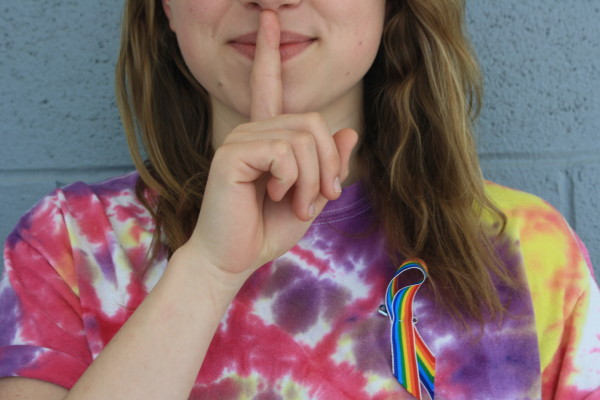 For the past two years, I have participated in the Day of Silence, a national student led movement that raises awareness about the injustices that too many members of the LGBTQ community face due to their sexual or gender identity. Founded on April 15, 1996 at the University of Virginia, the Day of Silence was created as a class project on nonviolent protest and involved just 150  students. In 2009, students observed the Day of Silence at more than 9,000 schools and has now spread across the country and through the halls of Metea Valley.

To celebrate the Day of Silence, participants vow to remain silent throughout the entire day, signing a pledge that states “Please understand my reasons for not speaking today. I am participating in the Day of Silence (DOS), a national youth movement bringing attention to the silence faced by lesbian, gay, bisexual and transgender people and their allies. My deliberate silence echoes that silence, which is caused by anti-LGBT bullying, name-calling and harassment. I believe that ending the silence is the first step toward building awareness and making a commitment to address these injustices,” according to dayofsilence.org. The silence is kept until the end of the day, or until a special celebration activity is held, often hosted by schools or other LGBTQ organizations.

“I’m not sure if Metea did the Day of Silence before I came here, but ever since I became the supervisor we have had three.  Each year it has grown, and now it has multiple days of activities that build community.  We had the initial sign up day, the Tie Dye day, which has become a GSA tradition, an open mic, a panel discussion on issues, the day of silence during the school day, and the night of noise which is a party that symbolizes those who refuse to stay silenced,” Gay Straight Alliance supervisor Kim Marion said.

I have only been a part of the Day of Silence twice, but both times, I received questioning looks and awkward questions about my participation, which of course, I couldn’t answer. I assume these stem from confusion, seeing as I am not part of the Gay Straight Alliance or any other LGBTQ organization. What onlookers fail to realize is that the Day of Silence is not just for those who identify as LGBTQ, but for anyone who considers themselves an activist against bullying. The Day of Silence is important to me, not because of my own sexual orientation, but because I refuse to be a part of the silence that occurs when someone is bullied due to their orientation or identification. I refuse to sit by silently while my friends and classmates are picked on for being their honest, true selves. My deliberate silence mirrors not only the silence that often occurs when someone is bullied or harassed and feels unsafe or uncomfortable in defending themselves, but the silent hush that arises when no one else is willing defend the victim. Ironically, my day without a voice is actually my method of voicing that I do not condone hatred, I do not condone bullying, and that I am willing to take an active position against it.

If you know me personally, you know that I’m infamous for being a chatter mouth. I’m one of those people who seems to talk just for the pleasure of hearing my own voice, so it is often received as a shock when my friends and classmates learn I am participating in the Day of Silence. I take that response as a challenge. Not only do I prove I can remain silent for the duration of the day, but my unusual silence brings attention to a worthy cause. My participation does not only affect others, but myself as well. With the amount of time I would normally spend socializing with friends, I instead draw my attention inwards and reflect on why it is necessary to hold a Day of Silence each year. It saddens me to think that a national movement is required to end an issue that wouldn’t even be relevant if we chose to accept each other for who we are: unique individuals with endless ways of defining ourselves. However, when I consider the enormous progress made by the LBGTQ community in their fight for equal rights, I realize that the Day of Silence is also a way of celebrating these amazing achievements.

“GSA holds a Day of Silence because it is a way, ironically enough, to engage in conversation and bring awareness.  There have been many great strides in the LGBTQ community, but there are still those who are silenced, and we still have more to do.  If you want any indication of why our struggle is not over, look at North Carolina and Mississippi.  The Day of Silence has had a huge impact on Metea and it has grown.  This year was the biggest one we have had.  I was so proud to see students who are allies taking part in the day,” said Marion.

I encourage everyone to take part in the Day of Silence. A common misconception is that sexual orientation and gender identity define who participates; that’s a myth. The only criteria for joining the movement is the desire to end oppression and bullying. No, you aren’t exempt from participating in class, (although I will add I accomplish significantly more work when I kick my talking habit), but you are making a statement that says you openly accept your peers for who they are. You are helping create an atmosphere where all students can feel secure and comfortable in  their own skin, and in their school.