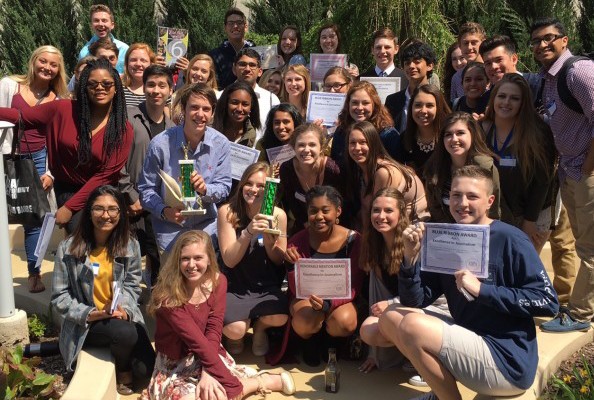 Chicago Sun-Times Urban Affairs reporter MaudIyne Ijhejirika was the conference’s keynote speaker. Ijhejirika kicked off the day’s  festivities by telling the story of her journey as a Nigerian refugee turned award winning journalist for the Sun-Times. Her story reflected her persistent quest to journalism excellence as well as emphasizing the bright future of the profession. “Newspapers are alive and thriving. There is a future,” Ijhejirika said.

Along with the guest speaker, students and advisers attended workshop sessions on various journalistic topics such as social media outreach, staff leadership, design, photography, and writing.

The conference concluded with an awards ceremony, where newspaper, yearbook, and news website staffs from northern Illinois were recognized for their annual journalistic achievements in categories ranging from best features writing to best yearbook photography.

In their first year of submission to the annual contest, the yearbook staff was awarded a honorable mention for staff photography as well as a Bronze Certificate for the overall yearbook.

“Winning a bronze certificate was really exciting because it was the first year that we submitted our book for experience and feedback. It was cool to see that our hard work was acknowledged,” yearbook co-editor-in-chief Taylor Williams said.

“I think it just shows that we know what the standard is and now that we’ve achieved that standard, we can improve even more,” online editor Drew Danko said.