Are you being savage or sickening? 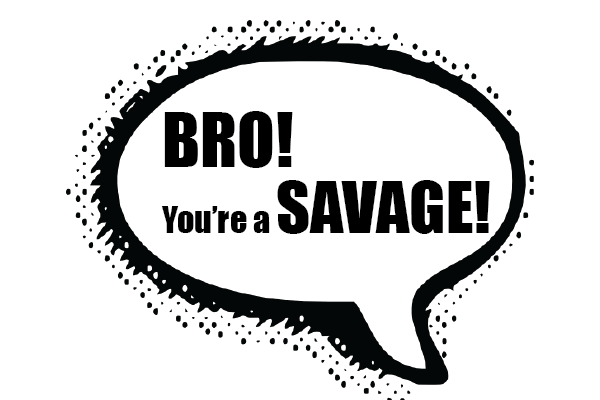 The trend of the term “savage” has become quite relevant within pop culture and the social media recently. The movement has become so relevant that it has manifested millions of tweets and has even inspired Instagram pages such as “thesavageposts” and “cybersavage”. At first, this trend was simply comical, full of light-hearted jokes. As of late, however, the term has become a blatant cover-up for instances of bullying.

The word “savage”, as described by Urban Dictionary, means, “An act that is either cool or hardcore, going beyond the normal scope of the given situation”. So the central issue with the word lies right here with its meaning. Being a savage is going past the line of amusing, and is walking directly into insulting. Furthermore, this extreme “humor” is just plainly for the attention. In the definition itself, it literally introduces the title as someone who is “cool”, portraying how the word itself has come to be the new standard of “popularity”. The term is genuinely a virtual handshake for humiliating someone, which is a fire that must be extinguished.

At first this trend was light-hearted, referencing irrelevant topics or poking fun at ideas that were thrown in the wind, whether that be chuckling at old childhood shows, or collectively mocking awful political leaders. But like any other trend, as it begins to wear out, people take it to the extreme. In order to gain Twitter favorites, users have turned to excessive forms of “savagery”. People have taken this notion so far, that the word is just a justified label of bullying.

I’ve seen instances where people insult others with no filter, and later when someone asks why they did that, the abuser will simply respond, “I’m savage!”. I’ve viewed other instances on Twitter where users will demean others because of their weight or appearance, and others will justify these atrocious words by commenting, “BRO! You’re a savage!”. Now, I’m not one to censor someone’s humor, but it gets to a point where enough is enough. If someone’s “savagery” has motives of demeaning or hurting someone, then it’s not savagery. In contrast, when the tweet is sent with a common understanding and with pure intention of laughs, it’s understood to be fair. But being a “savage”, shouldn’t mean using derogatory terms, being insulting, or being ignorant. We should redefine the word to congratulate truly witty humor; one that employs the use of educated humor, and doesn’t have the aim of ruining someone’s self esteem.