Trump’s exploitation of tragedy shows the problem with American politics 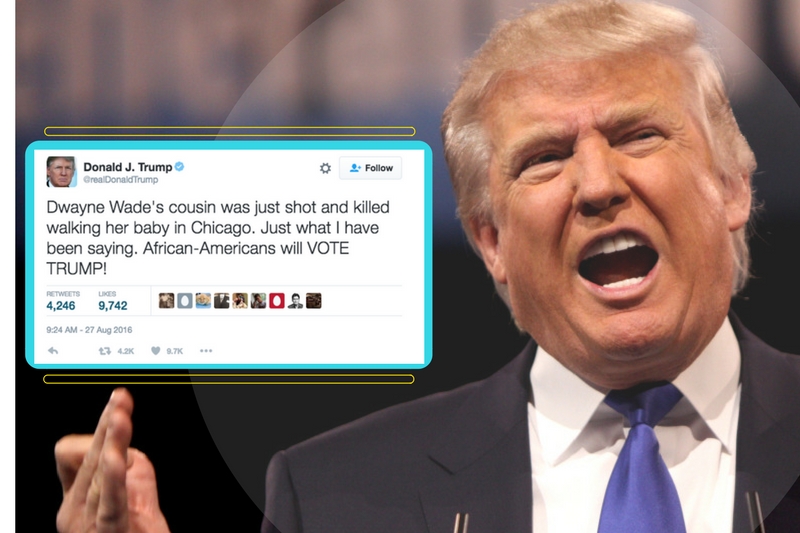 On the afternoon of Friday, Aug. 26, Nykea Aldridge, the cousin of famed basketball star Dwyane Wade, was shot and killed by two Chicago brothers. Aldridge was caught in the crossfire of a fight that involved the two brothers. She was pushing her infant child in a stroller when this happened.

This event is a prime example of the scope of inner-city violence. It affects the immediate victims, the victims family, friends, and children, and it affects the livelihood of the communities that are plagued by the violence. The most odd and anger-inducing about this situation, however, is that coupled with the tragedy of violence that surrounds it, the shooting of Nykea Aldridge also shows the idiocy of one of our presidential candidates.

Donald Trump, with all his usual grace and subtlety, saw this event and decided to tweet about it. Of course, as the Donald does, Trump decided to relate the sad event to his campaign somehow, and what better way to do so than with a tweet? “Dwyane Wade’s cousin walking her baby in Chicago. Just what I have been saying. African-Americans will VOTE TRUMP,” Trump tweeted.

The now infamous tweet is frankly appalling. He uses this tragedy as a tool to popularize his “order and peace” presidential campaign. While Trump and his team actually later apologized for this blunder, it still does not excuse the exploitative nature of this oddly phrased statement. The thing is, Trump is not the only politician to partake in such manipulative and exploitative means of self promotion. Politicians constantly exploit tragedies for either their own gain or for the sake of a political agenda.

Trump isn’t the only presidential nominee to use tragedy as an easy ride for more votes. While many times more subdued than her orange counterpart, Hillary Clinton also wields the weapon of exploited calamity for the sake of political advertising. One of her most subtle and yet powerful showings of this is with her public reaction to the Dallas Shooting.

For the uninformed, the Dallas Shooting was an event in which five police officers were shot and killed during a Black Lives Matter protest by sniper fire from Army Reserve veteran Michael Xavier Johnson. Nine officers were also injured from shots taken from Johnson. This moment of terror for the people of Dallas, Texas exemplified the rising tensions between the police and angered citizens.

Clinton, as most people were, was shocked by the event. She decided to later go onto CNN and give a reaction to the events. While her statements in that reaction were the usual inoffensive rhetoric spewed by most mentally sane politicians, one line stuck out like a sore thumb. “This is the kind of call to action, and as President I would implement the comprehensive set of proposals that I have been making for more than a year, including how we must do more to have national guidelines about the use of force in the police,” stated Clinton.

In that one section of a sentence, Clinton managed to warp the shooting to her favor. While she has been supportive of situations involving civilian and police conflicts, no matter which way the situation goes, all of that is rendered mute by this tragedy peddling. Clinton, with those words, basically said, “If you want police brutality and tensions to be solved, vote for me!” This warping of a horrific event into a political advertisement by Clinton just shows the sheer lack of respect to the tragic events that such calamity exploiting delves into, even if it is dressed more nicely than other examples.

The exploitation of tragedy doesn’t stay in the realm of political gain for an individual, however. Such practices are also used in the political gain for an agenda. No tragedy in recent memory evokes this feeling more than in the Orlando shooting, in which 49 people had their lives taken, and another 53 wounded, in the middle of the gay nightclub Pulse, by the hand of Omar Mateen. Politicians either side of the political spectrum pitched in on the cause of such tragedy, usually by cherry picking the facts.

Democrats seemed to have noticed that Mateen committed the shooting with a semi-automatic rifle. With that, many Democrats claimed that if Mateen did not have rifle, he would not have committed the atrocity, or would have at least killed fewer people, Democrats in the House of Representatives even had a sit-in in order to pass gun control laws pertaining to semi-automatic rifles. This ignores of course the idea that Mateen wouldn’t have access to other weapons just lying around his house, like a kitchen knife, for example, or even the fact that Mateen had a pistol with him too.

On the other side of the political aisle, Republicans and other right-wing pundits heard that Mateen pledged allegiance to ISIS on a 911 call during the shooting. Mateen also pledged allegiance to Al-Qaeda and Hezbollah, two other radical Islamic terrorist groups. This led right-wingers to believe that this was another attack from ISIS, and that we must fight ISIS even harder now because of this tragedy. This of course ignores the fact ISIS and Al-Qaeda are Sunni Muslim groups, while Hezbollah is a Shiite Muslim group. For those who do not know, Islam is generally split into two denominations: Sunni and Shiite. These two denominations utterly despise each other, so Mateen pledging allegiance to all three groups just shows that he does not know what he is talking about.

So what did cause the Orlando shooting? There are still conflicting reports. What is certain, however, is that Mateen’s father was very homophobic, and projected his feelings onto his son. So Mateen was very much radicalized and wished to commit this tragedy, but it was out of either hatred or self-loathing, not some radical group or access to a certain type of firearm. But that information was covered in a sea of political rhetoric and agenda, obscuring the truth for most people. And to obscure the truth for a calamity of this scale is truly despicable.

In all fairness, using events as a vehicle for discussion is not a bad thing. I mean, I’m doing it right now with this article. Using the flood in Louisiana to start a discussion on flood safety is a perfectly moral thing to do. It’s just with this kind of political rhetoric, the subject tends to get obscured and exploited. Instead of talking about how to take precautions for floods, politicians end up talking about how if you vote for them they will build more flood protection, or that their political agenda will help against floods. It turns the suffering of others into a tool and both obscures the truth of these tragedies and makes a mockery of the victims. It is truly one of the most immoral persuasion techniques in a politician’s arsenal.

So the next time you hear a politician take a current tragic event and use it to benefit themselves or their ideology, either call them out on it, or take your vote and put it as far away from them as possible.

Editor’s Note: An earlier version of this article incorrectly referred to Donald Trump’s last name as “Drumpf.” Metea Media apologizes for this error.