Trump’s stance on flag burning misunderstands the practice of it 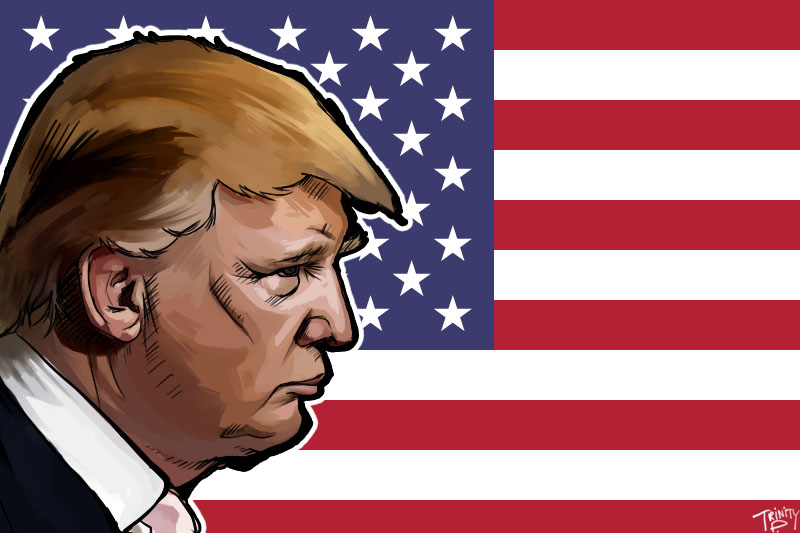 On Nov. 29, Donald Trump tweeted that “Nobody should be allowed to burn the American flag – if they do, there must be consequences – perhaps loss of citizenship or year in jail!” This was in response to increased animosity about using the flag as a protest symbol through desecration. Trump, being the patriot that he is, took offense to those comments.

The offense is completely justified. No one wants to see a symbol of their favorite thing be destroyed in front of their very eyes. Yet this mindset of safety and not wanting to your treasures be desecrated upon is the exact reason why flag burning should be and stay legal, because, although it may sound edgy, flag burning is a completely legitimate form of protest, and can not be made physically illegal.

First off, burning a flag is a very justified form of protest. This comes from the very idea of a flag in the first place. A flag is a symbol, nothing more and nothing less. It is supposed to represent something like a country or a state or even a city. So such a symbol can be then associated with the actions of the place or thing it represents, both positive actions and negative actions. That right there is why flag burning becomes justified in protests. The burning of a flag or any symbol is a rejection of the oppression or abhorrent actions that the represented thing makes.

A good example of this is with Colin Kaepernick. While he did not burn a flag, he rejected the practice of standing during the national anthem. While refusing to stand for the anthem is not as extreme as burning a flag, it’s still the same concept. Kaepernick saw the national anthem as a symbol for a country in which people of his race are, in his eyes, extradited and oppressed. In order to stand for his people, he sat down during a symbol for the country that did this. Whether Kaepernick was right or not, his protest was completely justified. And the same goes for flag burning.

Even if flag burning was not justified in protest, that would not impact the current legality of it. In 1989, during the case of “Texas v. Johnson,” in a 5-4 decision, the Supreme Court ruled that flag burning was a form of symbolic speech. Not only that, but that same Supreme Court later reaffirmed this decision with the case “United States v. Eichman.” So in order to make flag burning illegal, Trump would have to overstep one of the most powerful branches of government, which has the job of making sure laws and decision or within the limits of the Constitution. It seems that a President overstepping the guardians of our constitution in order to stop a form of protesting that people don’t like is a bit worse than burning a flag, which is something we have the constitutional right to do.

Some will say that regardless of any decision that has been made or the reasons for doing so, burning a flag is unforgivable. This is understandable. Flags can symbolize the bad, but it can also symbolize the good, like our veterans, or our rights as American citizens. But for some, the bad outweighs the good, and it needs to be shown somehow. Not allowing it to be shown is far worse than not allowing in the first place.

It would be stupid for Trump to take away this symbolic form of speech. Because in doing so, he will, instead of making America great again, be treading on what made it great in the first place.