Trump’s executive orders show the future of his presidency 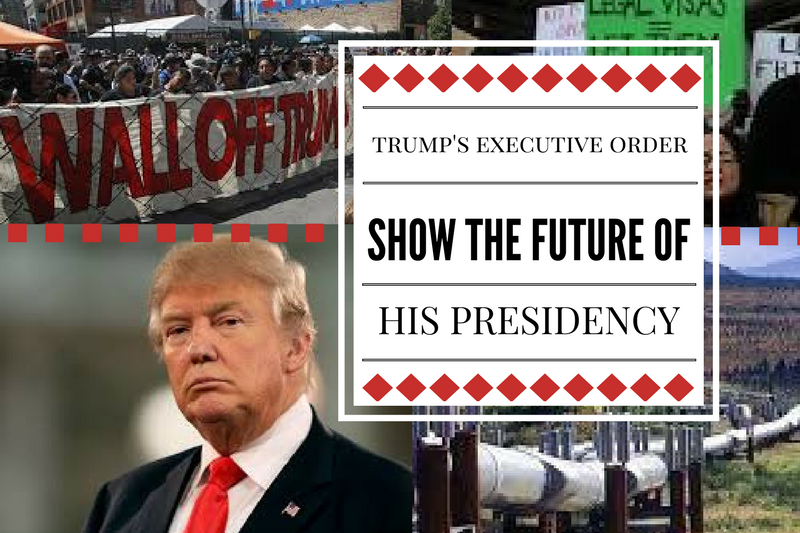 On Jan. 20, Donald Trump was inaugurated as our 45th President of the United States. He will now be in office for at least the next four years, and will become an instrumental figure in the upcoming future of America.

Trump has wasted no time in using his power as the president, as of writing, he has already signed 18 policy based executive orders. Those executive orders were signed in the span of 11 days. At this rate, Trump appears to be a president who liberally uses the powers of executive action in order to push change forward. This isn’t necessarily bad, as one of the greatest U.S. presidents, Franklin Delano Roosevelt, was notorious for his use of the executive order and brought in good results. It all depends on the nature of change brought on by the orders. Let’s take a look at some of the most pressing of the 18 executive orders, and see what they tell us of the America to come.

In his first order, Trump put in place an order that supposedly limits the economic burden of the Affordable Care Act. This allows the Secretary of Health and Human Services and the heads of other related agencies to delay or forgo the implementation of any provisions in the Affordable Care Act that would burden a state financially.

This order provides us a taste of what is to come with the future of the Affordable Care Act. The loose wording of the order means that it can apply to nearly any of the ACA provisions, meaning that necessary provisions tied to the ACA can just be swept away, killing the system with it. This is not a surprise however, as Trump was a massive opponent of the Affordable Care Act and said he would try to get rid of it during his campaign.

One of the executive orders has also reinstated the “Mexico City” Policy, or the global gag rule. This rule has been reinstated by every Republican President since Reagan, and states that the U.S. will not give any funding to foreign family planning organizations that provide abortions. Trump has extended this policy to any medical organization that has ties to abortions.

This reinstatement can do massive damage to not only to women’s health, but also global health problems. Abortion is a very sensitive topic for obvious reasons, but punishing organizations that give aid to areas in the world facing health epidemics can cause massive repercussions across the world.

Trump has now also officially pulled America out of the Trans-Pacific Partnership. This was a deal promoted by Obama and his administration that allowed for free trade across the Pacific, and made it easier for companies to gain extra profits by avoiding tariffs and by allowing them to easily shift production and labor forces across these countries.

This actually quite good of Trump to do. By opting us out of this deal, not only has he helped keep one of his promises of keeping jobs on American soil, but also helped prevent the cheap labor in other countries to be exploited by our large corporations. We may lose out on some of the economic gains of such a massive trade deal, and may have to endure higher prices for our own goods, but it is a worthy price to help support both the American and the international worker.

Trump has allowed for both the Dakota Access Pipeline and the Keystone XL Pipeline to continue construction. This is by far the most overlooked executive order that was announced by far. For those that do not know, both of these are transcontinental oil pipelines are meant to tap into oil reserves and carry them across the US. This construction has environmental issues that these lumbering constructs carry with them. Pipelines like these, if there is a spill or leak, can cause catastrophic damage to the environment surrounding the area. It isn’t some small chance of this happening either. Just this year, there has already been 4 separate occasions fuel pipeline accidents, and we are only a month into 2017. Considering the length of both of these pipelines, which happens to be quite large, an accident seems like an inevitability.

Not only do these pipelines show signs of being an environmental hazard, but the Dakota Access Pipeline crosses straight through Native American reservations. Building on to these lands, which of will happen thanks to the continuing of its construction, will violate our federal jurisdiction, but also be another instance of the U.S. infringing on the rights of Native Americans, and add to our already rocky history with the native people.

Trump has signed an executive order for our border security with Mexico-not to many people’s surprise. This order includes building detention centers on the border with Mexico to make decisions on the claims of illegal immigrants, hire 5,000 border patrol officers, and most importantly, start construction of the wall. He also signed an order that same day to crack down on illegal immigrants within the country.

These two orders were the main basis for Trump’s early campaign, and those early campaign promises were the same fuel that burned in the Trump hate train, and justifiably so. Not only is the extra border security and the wall going to cost a ludicrous amount of money to the point where the value reaches its peak diminishing point, but it also attacks illegal immigrants who came illegally as their only option. They came here seeking a better life, like our ancestors did, and did so in any way possible. While they did enter the country illegally, and some may not have the best intentions, throwing them out with little justification and not providing a path to citizenship is just tarnishing the very basis of the United States itself.

The struggle of illegal immigrants also relates to the impact of another one of Trump’s executive orders: the changes to refugee holding and international travel. In this order, it is stated that not only reduces the number of refugee intake by over half of our original intake, but also bars people from Iraq, Iran, Sudan, Yemen, Somalia, Libya, and Syria from immigrating for 90 days.

This was another one of the big principles of the Trump campaign, and it also resulted in a understandable amount of backlash. The refugee cap reduction seriously hurts those who seek refuge away from war torn countries such as Syria. The travel ban, however, has more dire consequences. While many of the terrorist organization that oppose our country come from those regions, not everybody traveling from those areas to the U.S. is out to get us. Many are just visiting friends and family or just harmless tourists. Denying them the right to travel to the United States based solely on the fact that they live in a certain area of the world tarnishes the American ideals possibly even more than the previous immigration blockades Trump has signed for.

Taking all of this into consideration, it seems that Donald Trump has fully attempted to keep up on all of his promises. He is building the wall and cracking down on illegal immigrants who may have done nothing wrong. He has barred people from multiple countries with a Muslim majority from entering the county. He has worked to undo what the Obama administration has attempted to do for the country. He has also attempted to help the American worker by removing trade deals that work against them. Trump has been implementing his vision of America over these 11 days. Whether that be a dream come true or a nightmare rearing its ugly head, it’s a fact. This is Trump’s America. Not a Republican America. Not a people’s America. Not even Pence’s America. This is the United States as Trump envisions it. That will be our future.