A recap of the Warriors’ hockey playoff season 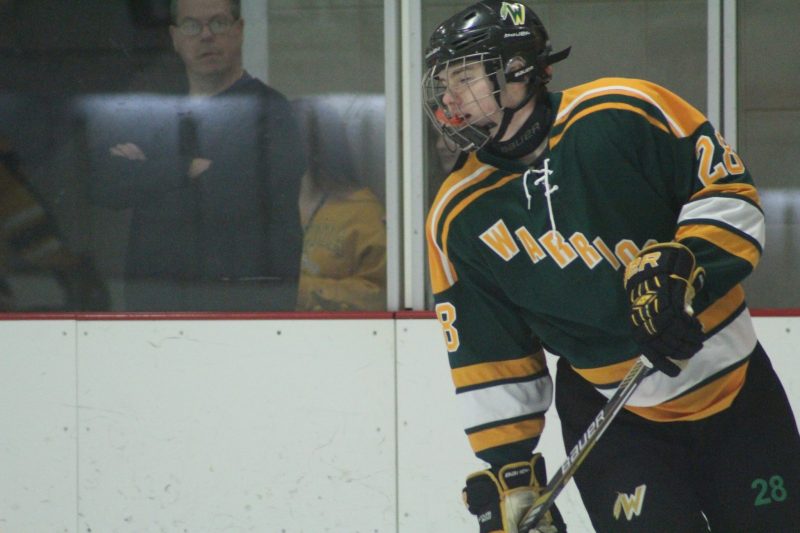 While the regular season came to an end for the Warriors Hockey Club, they continue to excel during the playoff season.

The Warriors played in a Round Robin tournament for their league playoffs, where they played against Glenbard, Oak Park River Forest, Naperville Central, and rival Neuqua Valley.

The Warriors won their first game of the tournament against Glenbard 3-2. While the first period remained scoreless, Freshman Zach Pearce scored the boys first goal, and not too long after, Senior Garry Stanley scored as well. The Warriors let one goal past them during the second, but Pearce scored once again. Glenbard scored again in the third, but goalie Kai Hallam held Glenbard at two goals.

In their second game, the Warriors played Oak Park River Forest and took a tough loss against them losing 2-5. The team ended the first period 0-1, but soon tied up the second with a goal by Zach Pearce assisted by Zac Lyons. Lyons scored again making the game 2-1. OPRF fought back and ultimately scored four more goals by the end of the third.

The Warriors dominated the Redhawks of Naperville Central with a score of 7-1. Sophomore Jack Flood scored the team’s first goal of many. Will Naffzinger, Alex Howell, Michael Alberts, Cade Kenyon, and Zach Pearce all scored in the second, making the game 6-0. Pearce scored again in the third, giving the Warriors a huge lead in the third. The Redhawks scored on the Warriors just once giving the boys a definite spot in the league semifinals.

The boys faced a very tough opponent Sunday night when they played against Neuqua Valley, the top team in the league. Neuqua only lost once this year, and that was against the Warriors earlier in the season. It was a tough game with the Warriors losing 3-4. The Warriors were up 2-1 with goals from Pearce and Kenyon in the first, but the Wildcats pushed in the second period, making the game 4-2. Pearce scored with an assist from Kenyon making the final score 4-3 Neuqua.