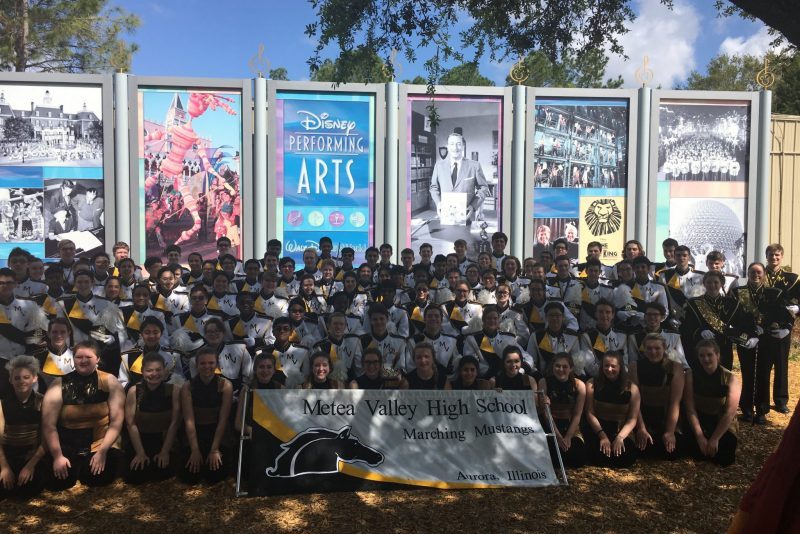 Over spring break, the Metea Valley Marching Mustangs along with the Jazz Collective went on a trip to Florida and the Bahamas to perform at Disney World, Nassau, and a Royal Caribbean Cruise.

The Mustangs first started their trip with a bus trip down to Orlando, Florida, where they performed in a parade at Epcot located in Disney World. Along with the performance, the marching band also attended a clinic where they were given tips on how to play music with confidence and with ease when sight-reading a piece. “Confidence is knowing how something is supposed to be played, and playing it the correct way,” drum major and senior Katie Goebel said in response to the advice the Mustangs learned.

“I really was proud of the students for performing well, but ultimately, it always comes down to the mark we make on the people that we play for. I thought the students were a class act all the way through when [it came to] behavior and being professional. So I really think we brought that Metea LIFE outside of the zip code,” band director Glen Schneider said.

The students continued their trip on a Royal Caribbean cruise to the Bahamas. Aboard the Majesty of the Seas cruise ship, members of the Jazz Collective performed a concert for the other passengers. Not only did they have a concert on the cruise, but they also performed in the town square of Nassau. “It was really cool to have such a different audience than we do at Metea, and definitely a great opportunity,” tenor saxist and sophomore Claire Baranyk said.

The trip was one of the Marching Mustangs’ major trips. Every year, the band takes a trip to a minor location, and every other year, they take a trip to a major location, such as Florida or Hawaii. However, The only difference between their trips is distance, as the experiences they have are limitless.

“I believe that every trip is well thought out by the band directors and an amazing experience for everyone. It’s nice to gain unique real-world experiences with the members of the MV music department wherever we go,” Goebel added.
The Marching Mustangs will finish off their season with the Memorial Day Parade later in May, and will work on their Coldplay-themed marching show for next year.