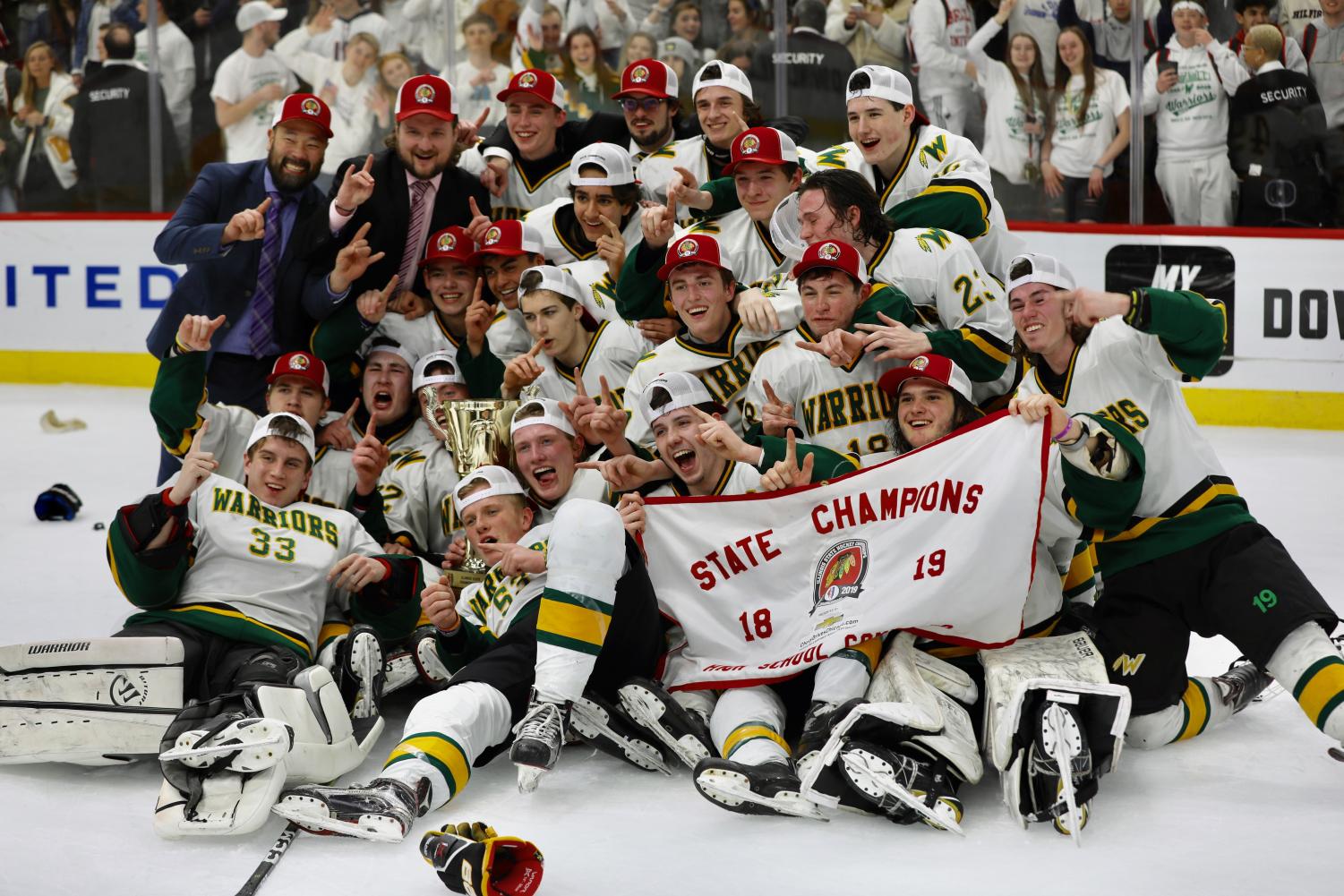 The varsity team won 4-3 over Glenbard in double overtime after an exhilarating finish. (Courtesy of Bob Neubeck)

The varsity team won 4-3 over Glenbard in double overtime after an exhilarating finish.

There comes a time in every champions’ run when they hit a bump in the road. A bump that might knock them off course, and put them into a new position where they have to prove they are capable. That moment came for the Waubonsie/Metea Warriors in the third period of Friday night’s state championship game. The moment when the team had let their 3-1 lead slip to a tie game, the moment where the team had to fight into two overtimes when they could have had it wrapped up. Resilience prevailed, and around 12:37 am the team was embracing and hoisting their trophy in front of hundreds of screaming fans.

Waubonsie/Metea beat Glenbard 4-3 in double overtime to win the finals of the Blackhawk Cup. The winning goal came from a Zach Pearce shot that was tipped in by Nolan Cummings with 6:05 remaining in the second overtime.

The team had been in the driver’s seat for the first 40 minutes of play. The first period saw three big saves by junior Justin Howard on Glenbard breakaway attempts, as well as two shots that went off the post for the Warriors. “We got a lot of perseverance on this team, we’ve had it all year long. For us to hit the post twice in the first is frustrating, but at the same time we knew that if we keep the foot on the gas pedal eventually things will get going,” coach Jeremy Dombro said.

The second period was a solid continuation of the first, just with a different result. Glenbard and Waubonsie were tied 0-0 after the first period. The Warriors’ chances were just a little more present than their opponents’. During the second period, those chances started to convert. A Pearce to Naffziger goal sounded the first goal horn. Pearce then found Sommers during a power play to take control at 2-0.

“I was just getting open [2nd and 3rd period] and we were finding each other pretty well, nothing too special. We came in knowing that we should get on every single person on Glenbard. We took it to shift by shift, playing like we were down 2-0. Coming out there to put the first one in, and being able to build on it was huge,” Pearce said.

The team didn’t get to bask in their 2-0 lead for long. Off of a faceoff, Glenbard player Sam Ruffolo got a breakaway chance, and this time he buried it. The Warriors responded back though, a few minutes later, Pearce found Alberts for a goal to make it 3-1. Pearce had three assists in the second period. “I think their game plan was to just wear me down, so I used that to pass the puck instead of doing it themselves. I knew that all my teammates are capable of putting the puck back in the net,” Pearce said.

The scoreline going into the third period was 3-1 in favor of Waubonsie/Metea. That’s where things got comfortable for the Warriors. Although the third period started off all Glenbard. Less than five minutes into the period, one of Glenbard’s primary scorers Brett Quinn ripped the puck from a Waubonsie player in their zone and scored a breakaway. 3-2. Five minutes of back and forth hockey with plenty of close calls went on until a jaw-dropping moment. Glenbard scored another goal with 2:35 to play. Tie game.

The third period ended all tied up. The Warriors’ lead had slipped away and the team had to quickly regain composure. “Everyone just tried to stay calm. All the seniors knew that it was their last game, and everybody wanted to play for them and for each other. We came out and battled. We didn’t score in the first overtime, but we got a penalty and overtime again to score a power play,” Justin Howard said.

The first overtime period was unsettling. Nothing was ever going to come easy for either team. The goalies were trading big save after big save and the teams scrambled to find their footing. Warrior players were switching in and out, staying on top of Glenbard’s own line changes. After one overtime period, the teams regrouped for a fifth overall period. The time was 12:30 am. “Those two goals in the third period were hard, but we turned around, forgot about it, and tied at overtime. Anyone could have won at that point,” Howard said.

Resilience and experience prevailed in the second overtime period. The game was heated the whole night, but neither team committed any serious blunders. The second overtime period was proof that Waubonsie/Metea was the better held together team when Glenbard had one of their top scorers head to the penalty box for tripping. Moments later, the defining moment came through. Naffziger frantically skated behind the net, looking for any opening. He then found the MVP of the match Pearce at the point. Pearce loaded up and fired. The puck went straight at the net when Nolan Cummings tipped it past the goalie. State champions.

This moment was a collection of an over 50 game season, with triumphs and disappointments. Experience and coaching prevailed, the best combined team in the state won on Friday night. “Eventually a puck is going to go into the net, and if you keep it simple it’s yours. [We got] pucks out to the red line and got it deep, and found whatever was left in the tank. We got that powerplay [in overtime] and this was our chance,” Dombro said.

The excitement carried into the locker room after the game as the team blasted music and rejoiced over their successful season. “We’ve had some close games against [Glenbard] this year and we just wanted to beat them just like in 2014, so it just feels great,” senior Jack Flood said. The feeling of brotherhood and their inseparable bond is now ingrained in the team.

Their success and impending victory will be a part of United Center history for eternity. A building that has housed some of the greatest Basketball and Hockey teams of all time was the perfect place to cap off a 44-10 season. These were the same halls where they lost the same game last year. They fell to BG/H/W in the finale and were determined to not repeat the same result.

For what was an awe-inspiring experience last year, the team is now all business when playing at the UC. Level-headed play was what kept them on top. “This year was a bit different. Last year was kind of all about the spectacle and in the moment, but this year, we have been through and know what has gone on here, so we were just looking to win the game,” Flood said.

Being the one seed in the tournament carried the burden of expectations. But the team has been masterful in doing just that all year. “We just knew that we were the better team. And [Glenbard] played that one line pretty hard [5th period]. And we have four capable lines to go out there and score, and we just stuck to our plan and didn’t stray away from it, because we knew that if we just found that line, we would be able to win,” Zach Pearce said.

This win capped off the first season for head coach Jeremy Dombro. He had been an assistant in years prior before stepping into the head role this year. “With us failing to win last year, the goal was to get back here and win it all. Honestly, it’s just a loss for words, forty-four and ten this year on the bench this year is pretty special, [we have] a great group of guys and all twenty of them played their roles perfectly,” he said.

This was the perfect season for the team. A season of redemption, dominance, and prevalence. The championship game was a metaphor for the team’s storyline. To prove their skill, and to not fold when their backs were against the wall. They won 4-3, but it was all on top of every goal scored for and against this season. Those were the goals in the games that taught them everything they needed to know about themselves, and the end result is sweet bliss.

“Just seeing [the puck] go straight in, all you can do is scream and skate towards your teammates to hug everyone. [Winning] is the best feeling in the world,” Pearce said.