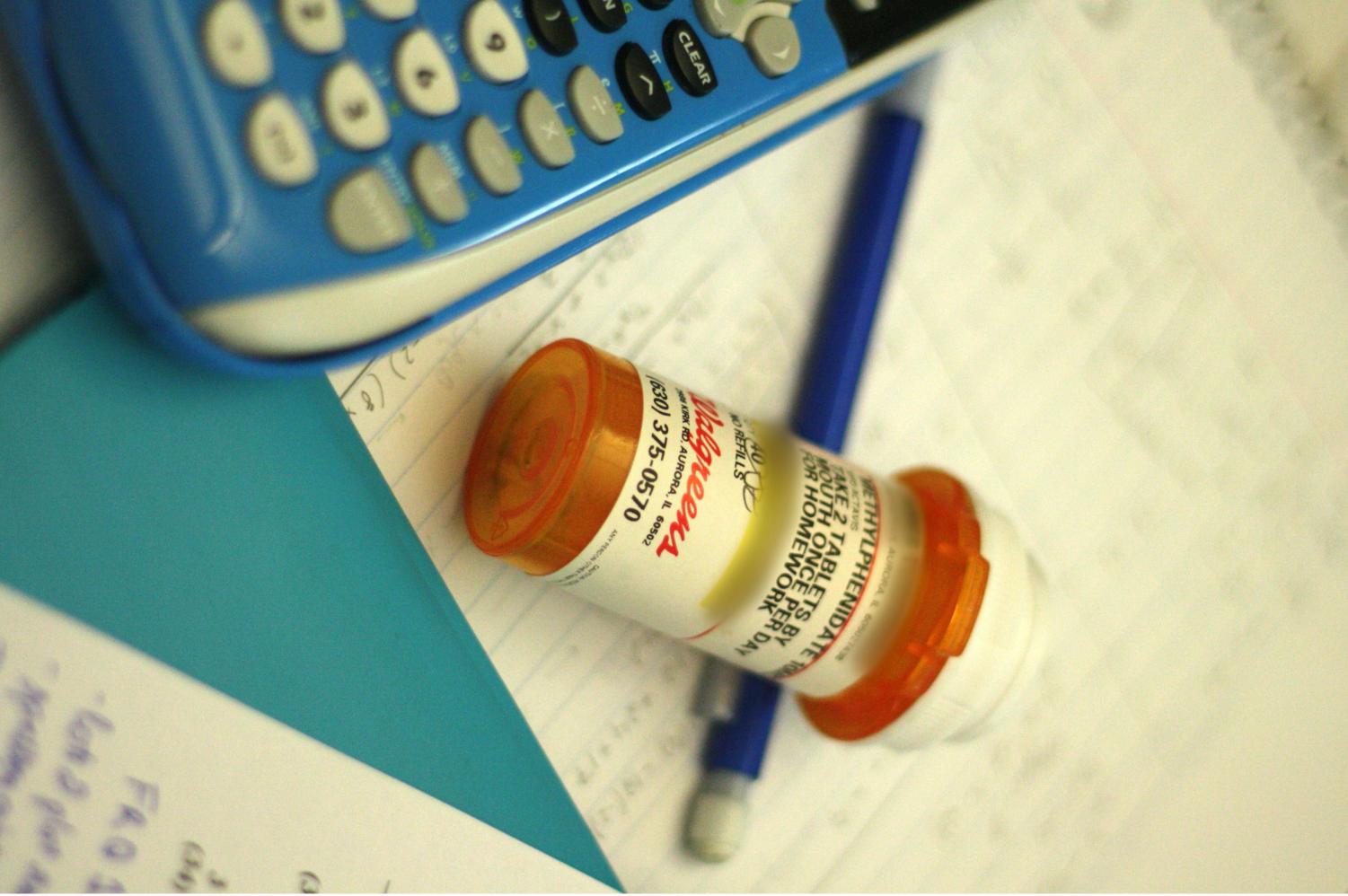 Some students are turning to ADHD stimulant medicines, to enhance their focus and academic performance, and increase general motivation. These drugs, however, can come with serious consequences and side effects. (Riley Burgoon)

Some students are turning to ADHD stimulant medicines, to enhance their focus and academic performance, and increase general motivation. These drugs, however, can come with serious consequences and side effects.

You’ve heard the names: Ritalin, Adderall, Concerta. You know what they do: give a boost of energy, help you focus, and keep you awake. At least, that’s what they’re prescribed to do. They can be extremely helpful to those that need them, but to those who don’t, they can have devastating effects.

“I hated it,” senior Jane said. Jane’s name has been changed for this article.

No drug has only one effect. Stimulants can have very powerful side effects, such as seizures, impaired judgment, decreased emotional capacity, and mood swings, the National Institute on Drug Abuse (NIDA) reports.

NIDA also reports that prescription stimulants increase the activity of chemicals in the brain, including dopamine and norepinephrine. Drugs that change the brain’s chemistry can have unexpected results, including psychosis, paranoia, and anger.

Some teens use Attention Deficit Hyperactivity Disorder (ADHD) stimulant medicines, to enhance their focus and academic performance, and increase general motivation. In today’s school climate, it’s no surprise that students feel the need to resort to stimulants to improve their ability to do well by our system’s standards.

Metea students are finding ways to take stimulants. Senior Lucy, whose name has been changed for this article, is one of the students who has used Adderall without a prescription.

Students that take these drugs can possibly feel the need to do so simply to gain an edge over their self-control. They might feel like they lack motivation, or that they might actually have ADHD.

“I can’t focus on the work that I need to do, and I always end up doing something else. So I sort of just wanted to get my stuff done. Also, beyond just getting things done, it’s nice to feel very motivated and very energetic about doing the things you have to do,” Lucy said.

Lucy believed the effects were worth the consequences for her because of the importance that she felt their work had. Lucy understood that the long-term effects could be potentially very dangerous, but she still chose to prioritize her work in and out of school over her long-term health.

Individuals feel both short-term and long-term side effects differently.

“The first time I [took Adderall], I didn’t feel anything for a few hours. I felt very normal like I wasn’t on anything. But after that, the side effects became more noticeable,” Lucy said.

She strongly discouraged others from experimenting with these prescription stimulants because of the varied consequences for each individual.

As every person has a different body and mind, drugs that can seriously alter their state of consciousness can cause problems for one person that do very little to another person.

That’s why one drug, like Adderall, works for someone like this student, but not for someone with a prescription. Lucy is not one of those people.

With countless warnings against people taking prescription drugs not that aren’t intended for their usage, it makes sense that the laws back that up. For each side effect that someone with ADHD gets, it becomes worse for someone without ADHD, Livestrong.com reports.

“The only reason I use [Adderall] is so I can get stuff done. I don’t feel the need to be focused, it’s just the easiest way to get stuff done for me,” Lucy said.

Jane also has taken Adderall without a prescription. She said that both times were not for homework, but rather as a pick-me-up.

“The first time I took it was for an extra-curricular. [Me and my friends] had stayed up late the night before, and we just needed a little boost. A friend actually had ADHD and offered some to us, and we all took them,” Jane said.

While the first student has a relatively positive experience with Adderall and its effects, the second student found that its effects were both disappointing and overwhelming.

“I did not feel any boost at all. I know it’s a stimulant, but I didn’t feel it at all. A couple hours later, I actually started to not feel very well. I got really anxious, had heart palpitations, [and a] faster heart rate. It really just felt like I was having an anxiety attack, like those were the symptoms. It was also my first time taking it, so I’m not sure if I just reacted badly,” Jane said.

Jane clearly recounted having to take excessive measures to calm down and find a way to stay relaxed because of the effect of Adderall.

Notably, Jane has never felt the need to use stimulants for school-related purposes, such as standardized-testing or working on homework but is familiar with that usage.

“It was just because we were tired, we wanted to be alert. I do know people that take it for that without a prescription. Particularly, I had a friend that took it for the SAT. Ironically, that was the test they did the worst on. But [people using Adderall] really don’t do it as often as some people think, but it definitely exists,” Jane said.

Jane says that she does not plan on taking it again in the near future with these consequences in mind. The effects were too much, unlike the other student’s experience.

When students decide to use stimulants to enhance their performance without a prescription, they knowingly, or unknowingly, agree to the contract that they are subject to punishment, both to their health and to their privileges. If used in school, students could be subject to even more trouble by jeopardizing of their graduation.

Dean of Students Jennifer Reyes explains her knowledge of stimulants based off of her experience dealing with kids that both distribute and abuse these drugs.

“These drugs are not meant for everybody’s body or brain. What’s happening is kids who have not had tests done on them are taking [these drugs] thinking they will have the textbook answer, solution, and effect on them that they want. And I’ve seen it have devastating effects on them because their bodies are not the same as their friends or family members that take them,” Reyes said.

Kids are selling stimulants that they either do or do not have a prescription for and that immediately makes them distributors which can result in serious trouble with the law.

The Student Metea Handbook indicates that “possession, intent to possess, use, or being under the influence of any drug” is automatically a Tier 4 violation. Tier 4 violations have consequences that include out-of-school suspensions and even recommendations for expulsion.

There are also long-term consequences that do not always manifest physically.

These drugs are not meant for everybody’s body or brain. And I’ve seen it have devastating effects on them because their bodies are not the same as their friends or family members that take them.”

Dr. Kyle Weber, a local Naperville-based therapist described what could be in store for those that abuse stimulants.

“It would be like giving them cocaine,” Weber said. “They would be hyper, sleepless, [and] driven.”

Weber acknowledges that school could be and most likely is a very large source of stress for many young individuals. She recommends that sleep is important, and it is also important to recognize your own worth without the evaluation of a school. There is no true reason to have to take stimulants to improve academic performance.

“[Students] feel the need to use stimulants probably because they lack the confidence that they can do it without the drugs. They want to get it all done, get good grades. And all they have to do to get the drugs is simply ask someone that has a prescription. They can also be over prescribed,” she said.

Students are taking stimulants with and without prescriptions. Those without are going against their health and the rules, but sometimes it feels like it’s worth it.

The best thing to do is to avoid taking mind-altering chemicals unless a doctor instructs you to because chances are, it has a negative long-term effect.

Issues like seizures and heart problems later in life. Students that aren’t prescribed stimulants just don’t need them, and the best thing to do is work as hard as you can and keep your mind on the prize. Without ADHD, you’re only hurting yourself by abusing stimulants. Maybe it helps you get a project done, or finish a test faster, but that minuscule effect will never outweigh the consequence on your mental and physical health. The crash isn’t worth it. There’s no rainbow after this rain.

A version of this story originally appeared in Issue 3 of The Stampede.