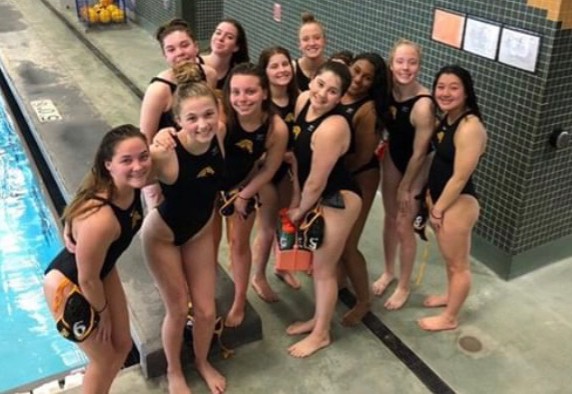 The girls’ water polo team pose for a picture together.

The lady Mustangs finished their amazing season 15-11.  They opened their season with a win against Lockport. Capping off their season, they took fourth place at the sectional semifinal. Back in March, junior Aimee Patterson was voted ‘Play of the Month’ for her dominating defense. Senior Rylee Stone was nominated for the Daily Herald Prep Sports Excellence Award earlier this month. The team had a lot of success this season due to its strong foundation as a team. “During this season, my team has done well in learning how each other plays and building our team dynamic around that. We all have our own role to play on the team. We’ve built a team where everyone’s included. That goes beyond the sport itself,” junior Aimee Patterson said.

The boys’ team started out their season with their first ever win 10-9 against Sandburg. At the beginning of April, junior Jimmy Cronin set a new Metea record for saves in a game with twenty-five stops, topping the old record of 23. Earlier this month, senior Colin Szczesny was nominated for the Daily Herald Sports Excellence Award. Szczesny received the first team all-sectional, and Cronin was voted second-team all-sectional and was the highest-voted goalie for the sectional team. After a well-fought game, the boys ended their season with an unfortunate loss to Naperville Central in the quarterfinals of the sectionals tournament. But, the game did not define their season. The Mustangs finished their season 19-9.