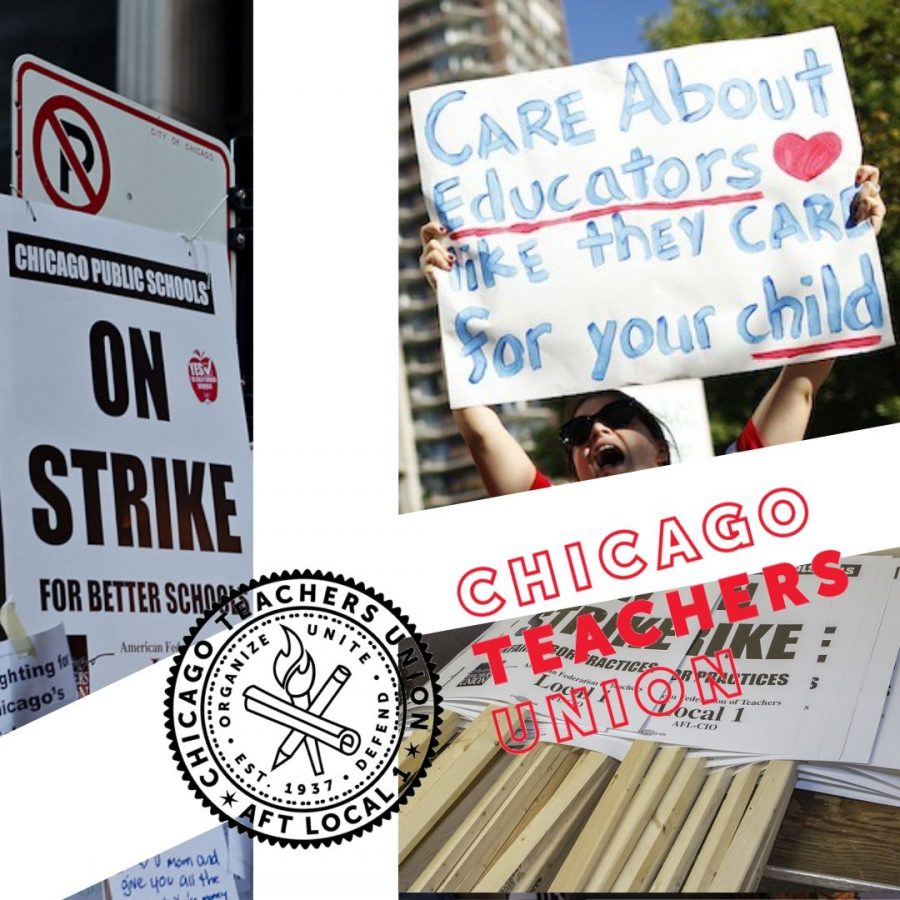 CTU Teachers strike as they clash with Mayor Lightfoot

On a seemingly normal October morning, a media onslaught would begin. Over the course of the month, endless headlines in blazing bold font would scream of money-hungry teachers and kids not getting the schooling they need. Endless op-eds, television segments, and newsletters spread throughout what seemed like an endless strike in Chicago. Thousands of teachers in the Chicago public school system began the longest teacher’s strike in Chicago history.

Ever since the beginning of the strike, the Chicago Teachers Union, known as the CTU, and their reasons for striking have been embroiled in controversy and misinformation. Many news outlets claimed that the teachers were greedy and looking for more pay at the expense of their students, others claimed the teachers were merely lazy and looking to get out of work. The reality of the situation in Chicago is that the Chicago Teachers Union’s strike represents the widening gap of educational equity and how far people in power will go to defend the broken system in place.

Following the expiration of the contract between the Chicago Public Schools and the Chicago Teachers Union, a contract dispute soon arose between the two entities. After consulting with a private firm, CPS offered the CTU a 16% raise over five years while increasing healthcare costs for CPS by 1%. The Chicago Teachers Union rejected the proposal for two main reasons. Despite the perceptions outside of the union, the CTU did not reject the contract due to the pay. In fact, the contract offered the Union more than they had asked in terms of pay. The CTU dismissed the proposal due to the commitment that a 5-year contract would bring, and more importantly because the CTU wanted to demand educational equity across all public schools in Chicago.

During the initial vote within the Chicago Teachers Union to begin a strike, the CTU labeled reducing classroom sizes and increasing the amount of support staff as their main priorities in passing the proposal. The union found that over 41,000 elementary school students were in overcrowded classrooms, nearing 23% of the total district population. The average class sizes in Chicago vary from being five to ten more kids than the average state class size in Illinois. Chicago Public Schools has long had a problem with its districting and the number of kids being enrolled. Neighborhoods that hold better standards of living and magnet schools tend to hold fewer kids. This makes it so there’s a clear line drawn based on wealth on whether or not a district will have adequate class sizes.

“There are just a lot of things that we don’t have to worry about that a lot of schools, especially on the west and south side of the city, do have to worry about. They have to accept all students which is correct to do, but at the same time that leaves many schools with overcrowded classrooms. These schools do not have either the room or, oftentimes it is the teaching staff to really manage all of those extra students,” CPS guidance counselor at Hawthorne Academy, Amy Dominguez said.

Dominguez works on the Northside of Chicago now, but she has worked on the Westside for ten years. The disparity between the levels of trauma and poverty levels infiltrates the troubles CPS has long been battling. Furthermore, Dominguez strikes another main issue with the current equity gap within Chicago Public Schools and the number of staff that each school has.

“Sometimes there could be 1,200 kids to one counselor or they may have a social worker come in for two days a week, or three days a week. We all face a lot of issues, but take that and multiply that by the amount of trauma that some of the students face in the western and south sides of the city. It is just hard to come in and learn if you don’t have any emotional stability or support,” Dominguez said.

Dominguez’s sentiment is matched by hundreds of striking teachers whose schools lack the basic needs that are necessary to run a functional school. Educational spaces look towards structures to identify what students and staff need. Maslow’s Hierarchy of Needs comes into play. Normally, there are three pillars that are considered: basic, psychological, and self-fulfillment needs. Basic needs include safety and physiological needs. With a structure that is widely respected, the expectations pave the way for districts to identify the priorities of running a school. Initially, the Illinois School Board of Education pushed out the standards that need to be met within each school district. The only difference between CPS schools and resource-fulfilled classrooms is the funding to go the extra mile above from the standards.

CPS schools have been at the bare minimum level to meet the standards. A prime example is how the supportive staff and resources have been stretched to their limits in what they can prioritize. The less staff CPS schools have more logistical work that will stack on their to-do list. What does it mean for the students? They are not given many opportunities to connect or seek assistance from the support staff. When students are in need of emotional help, the staff are not able to reach the psychological and self-fulfillment needs. The students quickly become mere numbers to these overburdened social workers and counselors, and soon this can lead to destructive results in behavioral and emotional development.

The lack of funding that a lot of these schools seem to have can be attributed to Chicago’s Tax Increment Financing districts. TIF districts essentially give any taxes collected within the district over a certain period of time to the developer of the district. So instead of school districts and other public services getting the money from the districts they serve, the company that created the homes and offices will receive tax money. While these districts do create development and growth, they have often been criticized for leaving a huge amount of funding out of the hands of school districts. TIF districts have also been a problem in District 204, with the Route 59 redevelopment plan drawing huge controversy for its proposed plan to create a TIF district. One of the demands of the CTU during the strike was to receive some of the money lost to the TIF districts so that the schools can actually fund a lot of students who are essentially going to school for free at that point. While a much harder thing for the city of Chicago to give to the striking teachers, the disastrous fallout of the usage of TIF districts in Chicago sends a stark warning to the now quickly approaching redevelopment of Route 59 in our own district.

On Oct. 30, the CTU reached a tentative agreement with Mayor Lightfoot which officially suspended the strike and resumed normal school operations within Chicago. The tentative agreement will be voted on today, which will ultimately decide whether or not the strike will officially end or potentially continue. 25,000 teachers will vote on the agreement which attempted a compromise between the rising anger of the Chicago Teachers Union and the defiant attitude of Mayor Lori Lightfoot.

The proposed agreement will form a council-funded with 35 million dollars a year to regulate class sizes and make sure classes do not become too large. Unfortunately for the Union, the new council will not decrease class sizes unless they hit certain caps, which are decidedly higher than the state average. The CTU will receive the 16% raise that was proposed prior to the strike by the mayor but will have to commit to a 5-year contract if they choose to push the agreement forward. While a good starting agreement for the CTU and Mayor Lightfoot to begin true discussions, the plan only gives the union some concessions in educational equity and do not fix the core issues in the CPS.

How did this strike seemingly come out of nowhere? The answer can be found in the power of the mayor’s office over the CPS. Unlike most other cities and towns in the United States, school board officials are not elected in the city of Chicago. Instead, school board members are nominated by the mayor of Chicago which has led to a long history of power plays and intrigue within the Chicago school board.

For the past half-century, Chicago has essentially been taking as much power as possible from unions and teachers. The city continues to place it in the hands of the mayor of the city. This is what has led to a boiling pot that recently burst in the largest teachers strike in Chicago history. The dismissive attitude of Mayor Lori Lightfoot throughout the entire affair has exemplified the problems between teachers and the mayor’s office.

The 2019 Chicago mayoral election had one of the lowest turnout rates in the history of elections within the Windy City. In a city like Chicago, a lack of political interest in local elections can quickly turn disastrous as this past month has shown. While Lightfoot has been successful in other areas, the lack of leadership shown during the past strike, and the disdain that was seemingly shown by Lightfoot towards unions and educational equity made the strike much more grueling, and much longer, than it had to be.

The fight that the Chicago Teachers Union started last month is nowhere near over. While the strike is suspended, for now, many members of the union have expressed that even if the current tentative agreement passes, the fight will continue without a strike. Despite what many media outlets and public officials have said, the Chicago Teachers Strike is more than just disgruntled workers getting more pay. It is a lesson in the dangers of political bureaucracy, political fence-sitting, the growing wealth gap in Illinois, and a testament to the power of organized labor.