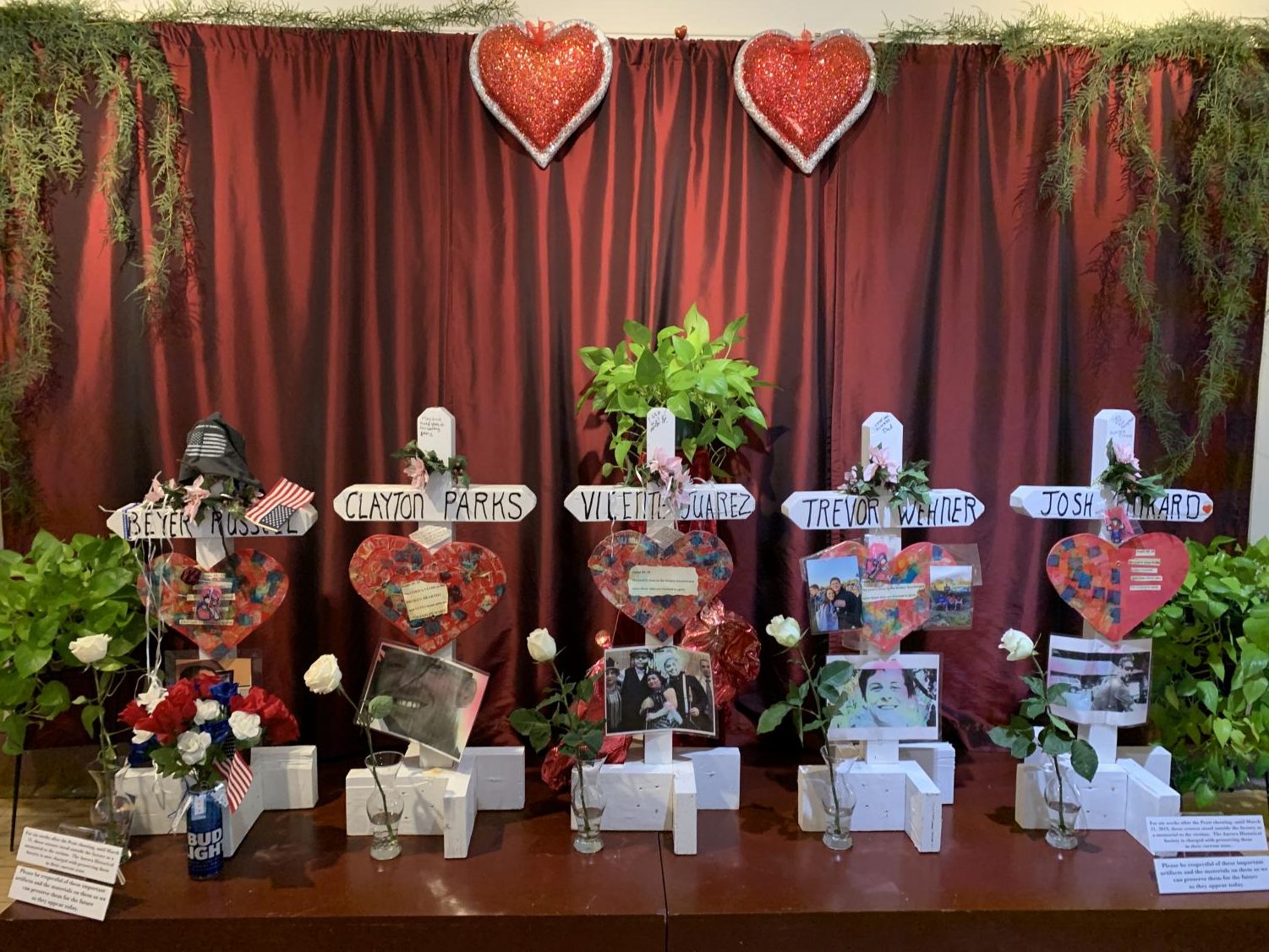 The original crosses created last year are now being preserved by the Aurora Historical Society.

Clayton Parks, Trevor Wehner, Russell Beyer, Vicente Juarez, and Josh Pinkard were shot and killed in the mass shooting at the Henry Pratt warehouse in Aurora on Friday, Feb. 15, 2019.

The day before, Feb.14, marked the anniversaries of both the Northern Illinois University shooting of 2008 and the Parkland shooting at Marjory Stoneman Douglas High School. The incident at Henry Pratt hit a particular nerve, as one of the victims, Trevor Wehner, was an NIU student on his first day of his internship.

One year after the shooting, community members and leaders reflect how Aurora has changed in the year that has passed.

“By the end of the day on Feb. 15, we had already become Aurora Strong and that strength has continued to multiply over the year,” Mayor of Aurora Richard Irvin said.

Aurora Police Department first responded to reports of a shooting on Highland Ave. at 1:24 p.m., as officers arrived four minutes after the initial 911 call. After about 90 minutes of gunfire between law enforcement and the gunman, officers at the scene reported at 2:59 p.m. that the suspect had been killed.

“I was struck by the response from all of the area,” Congressman Bill Foster (IL-11) said. “I remember seeing the screens at O’Hare and seeing the pictures of hundreds of police units that had responded.”

Nobody would be the same. In one moment, we became that city. The very same city we watch on the news over and over, community after community, year after year dealing with the horrific mass shootings. That very city”

Aurora Police Chief Kristen Ziman remembers hearing her officers enter the building as she and other APD officers raced to the scene.

“It was one of those surreal moments where I wasn’t quite sure what I was hearing over the radio,” Ziman said.

Not surprisingly, the national news cycle moved on fairly quickly. Within a few days, most people across the country added Aurora, Ill. to their mental list of shootings. Or maybe they did not even get that far. For the people of Aurora, however, the shock of a mass shooting at home remained.

“It was no longer detached from our everyday experience. It was something so close to home and really honestly just terrifying, especially since I knew people affected,” senior Ryan Owens said.

Metea students, both Aurora and Naperville residents, came together in the aftermath of the shooting. Student Government sent a gift to the Aurora Police Department on behalf of the school, and girls’ soccer had lunch with APD, collaborating with East Aurora High School on the surprise.

Across Aurora, community groups sprung up to help the families of those killed or wounded, as well as the city at large. Local businesses, such as Luigi’s Pizza, became meeting places for families and spaces for neighbors to get together and share information. In the weeks after the incident, these local spots helped facilitate the community effort to bring residents together to heal.

Eddie Zaragoza, an Aurora resident for the past 12 years, remembers thinking of his father who works in the factory behind the Henry Pratt building as soon as he heard the news.

“My friends and I just started talking right away. We were like, ‘I can’t believe this is happening right now, we have to do something,’” Zaragoza said.

Zaragoza went on to help create One Aurora, an organization dedicated to helping the community heal. A student-run organization, One Aurora held a blood drive and numerous art shows with the goal of donating to the victims’ families and connecting both sides of Aurora.

One year after the shooting, the community is still coming to terms with the ramifications of a mass shooting.

Politically, Congressman Foster and other local and state representatives have been working on bills focused on creating a federal definition of a mass shooting and curtailing gun violence. One notable aspect of the Henry Pratt shooting was that the gunman was charged with aggravated assault in Mississippi, which should have disqualified him for a gun license. But Illinois officials had only begun the process of revoking his Firearm Owners Identification card due to delays and miscommunications between the two states.

“I’ve been frustrated. I’ve been a supporter and cosponsor of bills every single session of Congress to do something about this,” Foster said.

Both sides of Aurora continue to host and attend events, centered around the arts, which are designed to create a sense of unity in the larger metropolitan area. For the one year anniversary of the shooting, the Aurora Historical Society created a Henry Pratt Memorial Tribute at the David L. Pierce Art and History Center in Downtown Aurora.

“We are Aurora Strong and we are going to come back from this stronger than we have ever been. But we are always going to remember these five beautiful souls that are no longer with us and the families that have to endure life without them,” Ziman said.

The memorial contains letters and cards sent to first responders and left at the site. The five crosses made by Greg Zanis also sit in the memorial, preserved and surrounded by the items that were dedicated to each victim. Banners from schools hang on the wall, as well as news clippings from newspapers on that day. 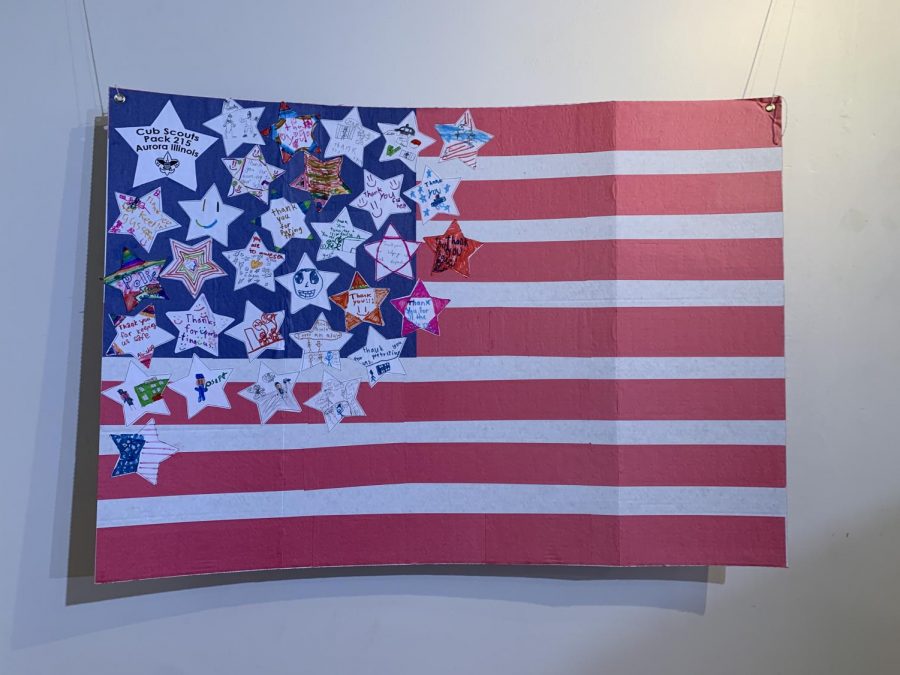 Gallery|7 Photos
Myra Bajwa
An American flag from a Cub Scout troop hangs in the memorial along with other items bearing the American flag.
View Comments (3)