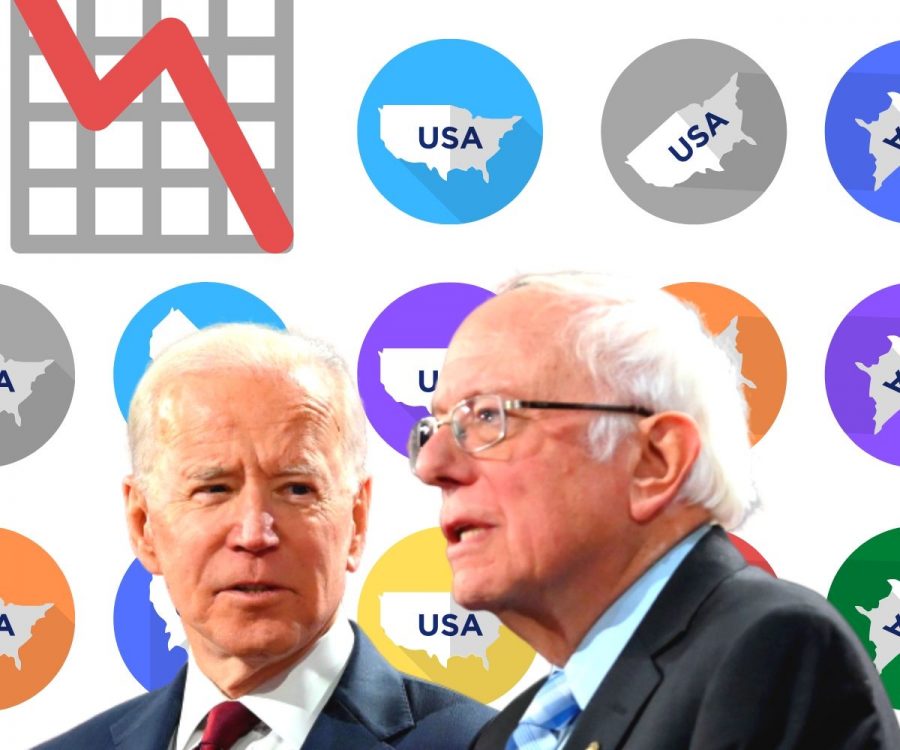 Just 72 hours before Super Tuesday every poll had Senator Bernie Sanders winning out over Biden in most of the states, three days later Biden won an overwhelming majority of the contest. The entire surge began after Biden’s big win in South Carolina, which coupled with pressure from former President Barack Obama, led to Senator Amy Klobuchar and former Mayor Pete Buttigieg to both drop out prior to election day.

The night before Super Tuesday allowed the moderate wing of the Democratic Party to unite, while the left struggled to even appear on the same side. An important thing to note about the final result is that the actual delegate count isn’t that far apart between Sanders and Biden, the race is certainly winnable for either candidate at this point, but the narrative that the Biden campaign is able to make post-Super Tuesday is what’s really pushing him over the edge.

As results came in it became increasingly clear that the main problem of the moderate-wing of this election cycle had stricken the progressives, a divided field. Unlike her fellow lower-polling candidates, Elizabeth Warren refused to drop-out, leading to her both underperforming in progressive states and also led to Sanders losing many states he had the numbers to win. States like Texas, Minnesota, Massachusetts, and Maine were easy wins for progressives, but a divided field against Joe Biden failed both candidates and has now paved the path for a Joe Biden nomination.

President Trump followed his massively successful start to 2020 by having one the worst moments of his presidency just a month after. The stock market, as a result of Coronavirus fears, the rise of Sanders, and over-speculation, has plummeted. For a President running on continuing the success of his fiscal policies, there’s no worse nightmare, but somehow Trump found one.

Along with one of the worst weeks in stock market history, came more and more news of Americans becoming sick due to Coronavirus. Coronavirus is a threat to the President for two primary reasons. One, it challenges the idea that the President is strong and competent. While many blue-leaning readers may not see the President in that light, a large portion of his constituency does. The President has shown such a level of mismanagement and incompetence with this issue that his approval ratings are lowering across the board.  Two, Coronavirus is beginning to show the weakness within our healthcare system. Fears that a Coronavirus vaccine would be raked up by pharmaceutical industries, and that a basic cold could turn out to be coronavirus has led to a spike in popularity for socialized healthcare systems, and drug affordability.

While Trump does fall into the pro-drug affordability camp, it’s undeniable that the support coming in towards these left-wing policies is going to threaten him in 2020.

Trump is not the only one being hurt by a Coronavirus outbreak. Recent polling across the US shows the Democrats getting a lot closer to retaking the Senate, and at the very least are almost certain to not lose any more ground to the Republicans.

While races in Alabama and Georgia are still almost certainly going to the Republicans, more and more opportunities are opening for a Democratic surge. In Montana, Governor Steve Bullock stands positioned to run for Senate, which would actually most likely result in a potential pickup for the Democratic Party. Senate races in Maine and Arizona are also looking about as likely as Alabama to flip in 2020. While it’s simply not realistic to expect a complete landslide for the Democrats, the Democrats stand poised to get some significant pickups in the Senate.

Recent polls in Texas have shown that the Republican stronghold is becoming closer and closer to falling. Socialism is viewed more favorably in Texas than in California, and both Sanders and Biden are less than 5 points behind Trump in statewide polling.

The answer to why Texas is moving so far left is pretty straightforward: Latino voters. The 2020 election is seeing record numbers of Latino participation in the electoral process, not because Latinos are just now becoming a significant part of the country, but because Democrats are now making actual efforts to reach out to them. Most Latinos are not that liberal, especially in social issues, which is why the effort by the progressive wing of the Democratic Party to make the guiding mantra about helping them economically and upholding their rights has finally gotten them to turn out to vote.

Politics is a game about appealing to large blocks of people, and the Democrats are beginning to consolidate support from Latinos, which the Republicans must take note of if they plan to hold on to their Southern firewall.

The problem in the left

Recent failures in Super Tuesday and South Carolina have led many to reanalyze the Sanders campaign and leftist activism overall.

As the primaries get closer and closer to its final days, it’s becoming increasingly clear that there are several fundamental problems with Sanders’ messaging that is pushing potential supporters away. For one, the toxicity of the Left, whether one thinks it’s justified or not, is undeniably pushing supporters away. There should not be a scenario where half of Warren’s base is flipping to Biden, but recent polling indicates that, and it’s primarily because of the hostility from members of the Sanders camp. While Sanders himself is not responsible for why there is a stigma of toxicity among Sanders supporters, he needs to be pushing the message of solidarity a lot harder than he currently is.

Another critical problem with Sanders’ messaging is his lack of American-centrism. When someone criticizes Sanders for calling himself a Democratic Socialist, Sanders usually goes for the standard response of advocating for the social democracies in Scandinavia rather than the socialism seen in many authoritarian regimes. While comparing Sanders to any authoritarian socialist is ludicrous, Sanders’ response isn’t the strongest. Americans don’t want to hear about how much better Scandinavia is, and drawing parallels between the US and a country like Denmark won’t convince anyone to reconsider their stance on the expansion of social programs.

The progressive left needs to embrace their roots within the original progressive movement seen in the 40s and 50s. Sanders calling himself the next FDR will appeal to so many more people rather than him calling for the US to be more like Denmark, even though both things mean the same thing in the end. The American left needs to embrace the fact they are American, which means that the movement has to have some roots in American progressivism, and acknowledge that America is significantly more shifted to the right, meaning the Democratic party cannot ignore and belittle moderates.