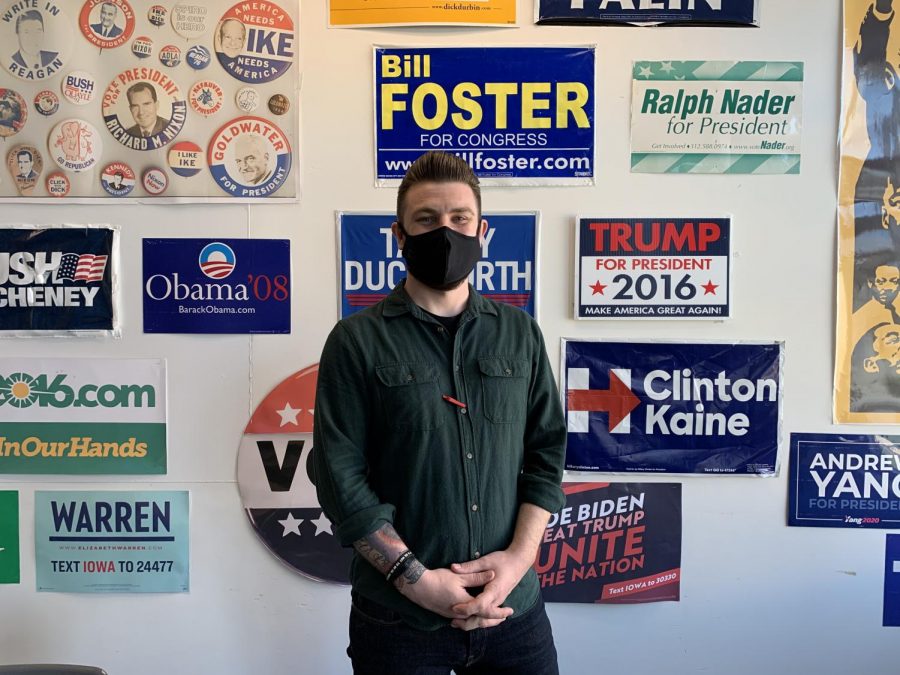 Government teacher Micheal O’Neill believes it is important for students to develop their own political beliefs.

Last August, a teacher in Texas was put on leave after putting up an LGBTQ+ and BLM flag in her virtual classroom. Although she was reinstated a few days later, the situation raised questions of when it is appropriate for teachers to share their political ideologies in a classroom setting, as well as what exactly defines a political idea to begin with.

High schools are a breeding ground for discussion and opinions among students. It is a way for both students and teachers to connect through their views and opinions. But when is the line blurred between indoctrination and discussion?

What is a Political Idea?

There are a number of political topics ranging from the environmental state of the earth to menstrual laws. These topics are widely argued across the U.S., including in our schools. English teacher Robert Tesmond explains that politics should have an impact on the well-being of different communities in the country, ultimately encouraging room for discussion in a political setting.

“A political idea is really something that involves our community and the decisions that need to be made to better it,” Tesmond said. “I would say that politics is something important that needs to be discussed and that people will have a wide spectrum of ideas on those topics.”

Mikva Challenge is a non-profit organization that works with schools to activate and amplify student voices on issues they care about. With the current political climate of the country, the Chief Education Officer of Mikva Challenge, Jill Bass, adds that anything can be made political. Recently mask mandates and traveling have been politically disputed due to COVID-19 and the idea of freedom. Before 2020, traveling and wearing masks would not have been depicted as a political stance. However, the climate of the world can easily change the way people view politics.

“I think everything feels political right now, and people are so afraid of that,” Bass said. “But because of who we are, everything in this country is a political thing. People’s identities are political, walking down the street, and depending on who you are and what the street is, could be political. Everything is political.”

Disadvantages of Politics in the Classroom

The way that schools teach their history classes has been a topic of discussion, specifically during the Trump administration. Last year, former U.S. President Donald Trump signed an executive order that worked towards ending what he deemed as an unpatriotic curriculum, naming it the 1776 Commission. This order put priority on a patriotic education while focusing on the freedom the United States stands for rather than the oppressive nature of the country’s history.

In a history class, topics someone may deem political will be discussed. Therefore, different opinions on these topics will be encouraged by teachers to be shared among students. This can also lead to teachers sharing their opinions as well. During these conversations, if a teacher is not cautious, their opinion can be viewed as factual. This would ultimately lead to students without the same opinion feeling left out and discouraged.

“Our key here is just to get the kids to develop their own political ideologies. We are not trying to indoctrinate them or have them believe one way or another.”

The worry that many parents have when it comes to political conversations in school is that their children will be influenced to share the same opinions as the one in power. Teachers are a crucial part of learning for a majority of children, so it is vital for them to be aware of how they go about teaching politics and history in the classroom.

“In my opinion, it should never be an adult in a room of a captive audience, people that have to be there and listen, telling them what to think, and maybe discouraging them from thinking for themselves, it should never be that,” Tesmond said. “It should always be the other way around, in which students and teachers can collectively share views and thoughts and process them together.”

Advantages and Misconceptions of Politics in the Classroom

Oftentimes, a person’s political opinions are influenced by those around them. Family plays a significant role in this as those views can be shaped or ingrained when a person is at a younger, more impressionable age. This is where the misconceptions of political conversations in the classroom being used as a way to enforce someone’s opinion on another comes into play. There are many advantages to having political debates in a classroom, and for the most part, they are not used as a way to enforce ideas but rather advocate for free speech.

At a young age, students in the U.S. are taught the importance of the First Amendment: The right to free speech. Classrooms are used to exercise this amendment as they are breeders of discussion among diverse groups of young people.

With the increase in the use of social media in the past few years, it has become easier for people to share and communicate with people who have opposing views. However, social media can do quite the opposite in which one can pick and choose what they see online which is often aligned with their personal beliefs.

“A lot of people in this country do not have much exposure to people who have different views than themselves. Social media exacerbates that because we create these echo chambers where you’re just around those who agree with you.”

Jill Bass is a former teacher herself who did not make a habit of sharing her political beliefs with her students. She felt it was important to give her students a space to explore their ideas without centering the conversation on herself.

“A classroom to me is the perfect place because a teacher can make sure it’s a safe space where you can have exposure to new ideas,” Bass said. “I don’t think the goal is to sway other’s opinions, but I think the goal is empathy. It is to understand where another’s opinion comes from and explain how the experiences they’ve had led them to believe those opinions.”

Some students, such as junior Cheyenne Brown, believe that it is beneficial to have these conversations in the classroom because it allows them to explore other opinions and options at a young age. It can be better to have political deliberations at a young age so that students can learn how to properly engage in these types of discussions.

“I think it’s good to have a basis of not only being familiar with important issues but also hearing from multiple sides because I know it’s going to be more than one person sharing their opinion,” Brown said. “It’s good for learning how to have a general discussion outside of the classroom and to be able to talk about these things and think through and look at different perspectives.”

There is not a clear-cut answer to whether or not teachers should be voicing their opinions in the classroom. There are a variety of factors that come into play from how the teacher teaches to the social demographic of the school in general. What can be said is that political conversations are happening among students and teachers and have been for years. As the future generations continue to grow and create new spaces of inclusivity for their peers, so do these conversations. Whether they are detrimental or beneficial is up to those having the discussions.

“The topic is really complicated,” Tesmond said. “Like anything else, I think that if we all operate under the assumption that we’re going to make mistakes, and that in making mistakes, we can correct ourselves, these discussions can be great learning opportunities.”

As an English teacher, Tesmond tries to understand the different opinions of his students by listening and learning from them. Having these deliberations contributes to this way of thinking, making it easier for the teachers to take a step back and look at new perspectives as well.

“I think the point of having a political space is to recognize the humanity in each other,” Tesmond said. “With that, I think that it’s important to understand that as individuals, we’re all going to make mistakes when we have these discussions and that it’s a courageous act, to have them and to be vulnerable enough to possibly say something or do something that later you would understand differently.”