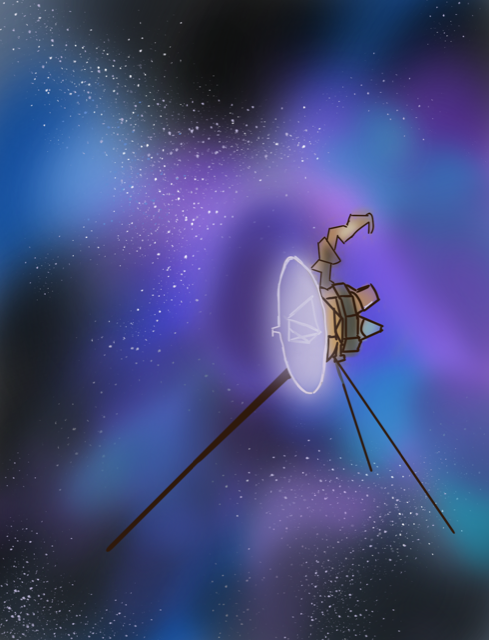 NASA’s Voyager mission is acknowledged as one of humankind’s greatest achievements.

Humankind has always been curious about the stars above and the sea below. Curiosity is one of humankind’s strengths and continues to be a prominent trait of humanity. Countless people have questioned what is beyond our world, and those questions lead to discoveries about the universe. The universe is a big place, and we do not know a lot about it, but humankind is eager to solve the greatest mysteries of our universe. Space exploration, and its sub-branch aerospace, will lead us to solve those mysteries, and it is a rapidly growing field. Many missions have been conducted to expand our knowledge of the universe, such as the National Aeronautics and Space Administration’s (NASA) Voyager. The Voyager mission is a huge achievement because the Voyager is the first manmade object to travel past our solar system and take pictures of our whole solar system. Currently, the Voyager is still traveling through space and is predicted to travel for many more years.

Before 1957, space exploration was a new territory that no country had crossed before, however, the Soviet Union was the first to start the space exploration age with its satellite called Sputnik I. The launch of Sputnik I pushed the creation of NASA and the space race between the United States and the Soviet Union. One of NASA’s major contributions was the launch of NASA’s first orbiting laboratory called the Skylab I. The Skylab I helped in understanding how humans are impacted by staying in space and expanding our knowledge on solar astronomy. With Skylab I launched, NASA decided to send spacecraft like the Viking and the Voyager to explore space. The Viking gathered information about Earth’s sister planet Mars. After the Viking’s success, NASA began working on the Voyager. The Voyager mission was very special because it can only be conducted during an alignment that happens every 176 years. Every 176 years the planets in our solar system align in a position that can be used to send probes through space. In 1977, the Voyager used the gravity of each planet in the specific alignment to travel across space, ensuring its specific path and allowing it to travel farther than any spacecraft before.

What is the Voyager?

The Voyager is a twin spacecraft that was meant to do a flyby of Jupiter and Saturn. Following the Pioneer 11 spacecraft, the Voyager was meant to collect more information about our solar system and universe. Although the main mission was to simply collect information on Jupiter and Saturn, the mission extended to the surprise of NASA. This success can be credited to all those who worked on this project such as Carolyn Porco, a planetary scientist; Heidi Hammel, a planetary astronomer; and Candice Hansen who was part of the Voyager imaging team.

“They [the Voyager team] made some remarkable work, but they also dared to dream big,” Associate Professor of physics Paul Bloom said.

The scientists took a risk and put all of the best equipment onto the craft. There were no guarantees that the Voyager would go further than their main mission, but with its surprising travel, the Voyager became a huge success. In the late 1900s, Voyager’s travel through our solar system was a massive achievement because no man-made spacecraft ever traveled so far. To Bloom, this distance the Voyager traveled was monumental for space history.

“I vividly remember, especially with Voyager to the encounters with Uranus and Neptune and being able to do this grand tour and visit all the outer planets,” Bloom said.

The achievements of the Voyager

With the Voyager passing way beyond its main mission, the twin spacecraft, Voyager I and II were able to provide important information to scientists about our universe. Among all of its successes, there were three important achievements of the Voyager.

The first major achievement is that the Voyager is the first man-made object that has flown past our solar system. Even to this day, there is no spacecraft or probe that has traveled the distance the Voyager has. It is still traveling through space even to this day, meaning it has been traveling for the universe for over 40 years. The engineering of these space probes was very advanced for the time period it was created in. The scientists achieved their initial goal of studying our solar system, and the Voyager performed beyond its expectations.

The second major achievement is that the Voyager created the Solar System Portrait. The portrait contains all the pictures of the planets and the sun in our solar system. No other probe has taken pictures of our whole solar system, which makes the Voyager the first space probe to accomplish an important task. The Solar System Portrait is a gallery of pictures that present Earth’s family such as Earth’s sister planets and the Sun. The Voyager’s travel allowed this picture to be recorded as one of mankind’s major achievements.

The third major achievement is that the Voyager gathered new information and confirmed the hypotheses of scientists. For example, the Voyager found that lightning is present on Jupiter. Before this discovery, there were no records of lightning on other planets, so the Voyager’s flyby of Jupiter helped scientists understand more about the environment of Jupiter. The Voyager also helped confirm other theories, such as Saturn’s moons needing to be close to its rings so that the rings would stay in line. With all the data that the Voyager collected, it will serve as guidance to future space probe projects. Aerospace engineers can improve space probes to fly farther than the Voyager and get more information about the universe.

The Voyager aided in learning more about our universe, and its creation and achievement is a reminder that humankind is capable of creating incredible technology.

“[Sending the Golden Record] is a pretty trusting act,” Erskine said. “It’s saying that if someone picks this up, you hope that they have good intentions.”

We can not know if extraterrestrials would be friendly, but we do know that we can be open-minded and give a chance. There is still a debate on whether humans should allow the information about the location of our planet to travel in space. However, humans wish to be friendly with beings from other worlds, and the Golden Record represents trust. Humans trust that extraterrestrials will respond friendly to our kindness. This is why the Voyager holds the history of humankind. As long as the Voyager keeps traveling, so will our presence.

Interest in the aerospace industry

As our knowledge and curiosity of space expand, so do space-related job opportunities. The Bureau of Labor Statistics projected that 8,600 job openings for space scientists will exist from the years 2014 to 2024, and 171,900 job openings for engineers will be present in the same timeline. More than 50 years ago, we did not have much technology for space exploration. Now that technology is rapidly improving, students have gotten more interested in space. Senior physics major Rachel Barron said that she was inspired to learn more about space exploration because of a particular rover launched by NASA.

“I remember when [the] Curiosity [rover] landed and my school did a presentation on it,” Barron said. “This is a highlight in my memory of when I began having an interest in space exploration.”

Barron’s school project inspired her to delve deeper into the field of space. The curiosity of students like her is the reason why space exploration is growing. With all the achievements that NASA and many other space agencies have made, the newer generation is finding a fascination with space.

Senior physics and math major Jodi McLennan has a similar situation that sparked her interest in space. She joined a summer project that attempted to propose a plan of Mars settlement, and her experience from the project helped her in choosing her future job.

“These personal experiences made me feel that pursuing space exploration would make me part of something much larger than myself, which is an important attribute I want in a future career,” McLennan said.

Similar to Barron and McLennan, STEM classes can expose students to the field of aerospace engineering and encourage them to pursue that path. The knowledge gained from the projects like Voyager and Curiosity inspires people to join this industry. The human fascination to gain knowledge will never end, and neither will the curiosity of space.

The team that created the Voyager hoped for it to go far beyond any other craft that humankind has made. It did achieve that goal, and now it is traveling beyond our solar system. The Voyager represents humankind’s curiosity about the universe as well as humankind’s capabilities. Our curiosity about our universe will not end, and space exploration helps answer many questions about the world we live in.

“There’s something so inspirational about going to space,” Erskine said. “Space exploration flourishes my imagination in a way that other subjects don’t.”

The Voyager and the prospect of discovery is an inspiration to future aerospace engineers. Without the Voyager, we would never know the information that we now know.

“Our knowledge has grown so much, and there’s still a lot we don’t know, but that’s the thing about knowledge,” Bloom said. “One of the things that learning helps you do is to understand how much that you don’t know. So, I mean, it’s been an adventure. For me, those probes have essentially been out there, almost my whole life.”

The Voyager probes are still traveling and they will continue to travel through space for many more years. As the aerospace industry grows with new minds, the achievements will bypass that of the Voyager’s. Humankind’s curiosity will always outrun our discovery, but we will continue to chase after answers to our questions.