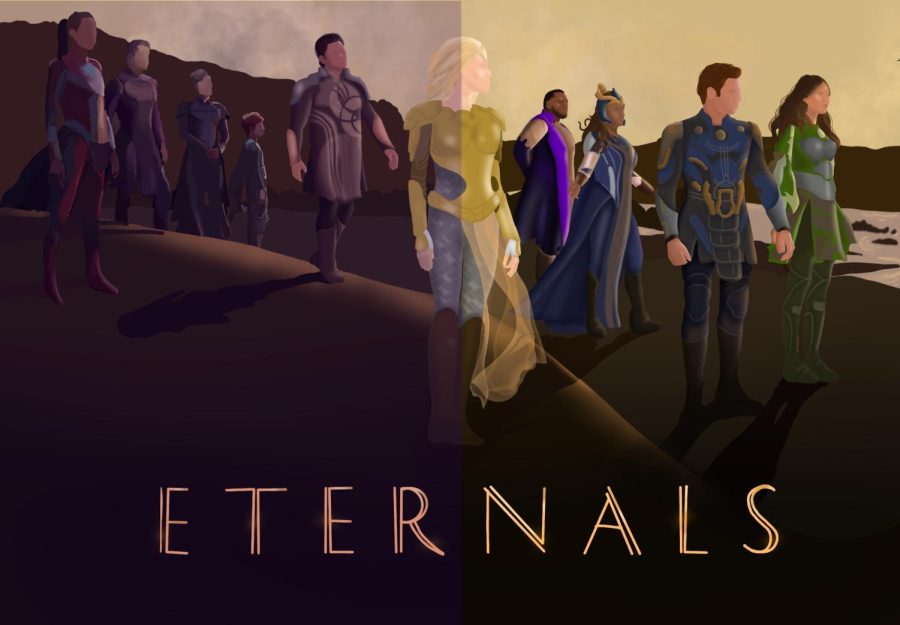 “Eternals,” the newest Marvel movie, has gotten many mixed reviews in the media. The film is very different from the traditional Marvel action movie, but is still worth seeing.

The Marvel Cinematic Universe (MCU) has made a comeback with the release of a new comic adapted movie named “Eternals.” This new movie is a fresh look for Marvel because of its diverse and well known cast. The blockbuster film has an array of stars making their debut in the Marvel Universe including Salma Hayek, Bill Skarsgard, Kumail Nanijani, and even Angelina Jolie.

The story of the Eternals starts during the year 5000 BC, approximately seven thousand years ago, when a group of 10 immortal beings landed on earth. Their one mission was to rid the earth of evil deviants. The deviants were a new kind of threat to humankind, them being gruesome creatures that fed off the lives of human beings, it is clear to see the need for the Eternals. Within the first six thousand years of living on earth, they were able to fulfill their mission and then live their retrospective lives wherever they pleased. Going their separate ways, they each lived apart doing the things they loved, while also keeping an eye out for new deviant threats. They lived normal lives until an eternal, Sersi, portrayed by Gemma Chan, was attacked by a new kind of deviant. The gang is forced back together to defeat this new threat and even learn a bit more about themselves as well as their true past.

“Eternals” director, Chloe Zhao, was able to tell the story of these super warriors and maintain the natural story of diversity and coming together despite ethical differences. Each Eternal has a very unique personality and a one-of-a-kind way of spending their immortal lives on earth. Salma Hayek’s character, Ajak, was the crew’s motherly figure acting as the leader of the Eternals and the only one who was able to talk directly to the man giving the Eternals their orders. She spent time in the post-deviant world caring for the younger eternal named Sprite, portrayed by Lia McHugh. The development of each character’s storyline was much different than the normal action superhero marvel is used to. Characters like Druig, played by Barry Keoghan, and Phastos, portrayed by Brian Tyree Henry, are not your normal kind of hero. After giving up on the human race they were sent to protect, they decided to put a pause on their heroics and spent their lives trying to achieve their own kind of lessons.

The cool part of Zhao’s retelling of the beloved Marvel comics was that each character’s story teaches the viewers a lesson. The common Greek myth of Icarus is dramatically told through Richard Madden’s character of the same name Ikaris. In his story arc, Ikaris tries to take on more than he can chew and ends up hurting the people he cares about. While another Eternal, Kingo, portrayed by Kumail Nanijani, has a hard time feeling needed after the split of the Eternals. So, he becomes a multimillion-dollar Bollywood actor, who still finds himself useless to the people around him. Seeing these stories of heroes who have real human problems that they work through without the use of their superhuman abilities is heartwarming and truly inspiring to hear about.

“Eternals” had something for everyone, people looking for romance, comedy, and of course action. I found the romantic sides of the movie almost refreshing and exciting to have in a Marvel movie. The romantic chemistry between Druig and Makari, another eternal character played by Lauren Ridloff, was an immaculate portrayal of a subtle love story between two people who would genuinely die for each other. For instance, they seemed to always have each other’s backs in fights against the deviants. However, the love triangle between Ikaris, Sprite, and Sersi felt out of place and often did not truly fit the storyline. The three characters did not seem to have a heavy romantic side and then midway through the movie Sprite admitted to having jealous feelings towards Sersi and Ikaris’s romantic relationship. Romance has not been a large contribution to the MCU, but in the “Eternals” case when done well, it truly helped sell the story of these immortals sharing the same experiences as everyone else.

Zhao’s retelling is new and exciting, it is so extremely different from other Marvel movies, but honestly, that is just what makes the movie even more of a must-see. Die-hard Marvel fans might have a tough time adjusting to her way of portraying these beloved superheroes, however, the movie has a way of keeping the audience engaged throughout the whole showing.

Going into “Eternals” I did not know much about them as individuals and their purpose in the Marvel Universe. The Eternals storyline, created by Jack Kirby, follows a group of individuals gifted with superhuman abilities who protect planets from the Deviants, creatures that hunt and kill lives. It was an interesting and unique movie compared to the other Marvel films due to its different type of filmmaking from director Chloé Zhao, but “Eternals” fell a little short. Marvel Studios newest film “Eternals” had a lot of pros to it like the representation of the celestials, the action, and the connection between the Eternals; however, it lacks in many other sections throughout the film, especially when the Eternals are trying to find each other again after being a part for centuries.

The plot was a simple, dragged-out story. Many scenes felt too long, while others felt like they should have been longer, so the connection with a character could be stronger. A problem was the number of characters they had as well. In the case of  the Avenger films, we have been with the crew for many years. Each character has their own solo movies, so the viewer is familiar with them. With “Eternals,” there is an entirely new cast of characters, making it hard for the film to give depth to every member of the team. Many scenes were boring due to the outright lack of the consequences and struggle the characters were facing. For example, the hunt for the remaining Deviants felt like a chore compared to a quest to save Earth. The Deviants as the villains did not work as well as they should have. It felt like an excuse for the Eternals to still be on Earth. Their presence was illogical, especially in the second half of the film. It made no sense having such characters in the plot especially when the Eternals discover the truth of what their mission on Earth truly was. The Deviants weren’t implemented as strongly as they should have been. Also, some characters had more screen time than others- which was expected- but the more intriguing ones were those not focused on as much, such as Phastos, portrayed by Kumail Nanjiani, and Gilgamesh, played by Don Lee. Characters like them shined on-screen with the fun, personal acting they brought to the screen.

Many aspects of “Eternals” were not great, making it one of the more Marvel movies that I do not want to rewatch as much. Compared to Marvel Studios’ last film “Shang-Chi and the Legend of the Ten Rings,” “Eternals” does not match up to the storytelling and world-building within these characters’ worlds. “Eternals” is not one of the better films, with a personal rating of six out of 10. The story was not the worst but could have been better represented. Chloé Zhao does have a unique form of storytelling, but it did not match as well as I expected it to when watching the film. “Eternals” brought a handful of new characters to the Marvel Cinematic Universe; however, its story does not make it as impactful as other comic book films.