The impact of 2021’s politics, music, and COVID-19 waves on students and teachers 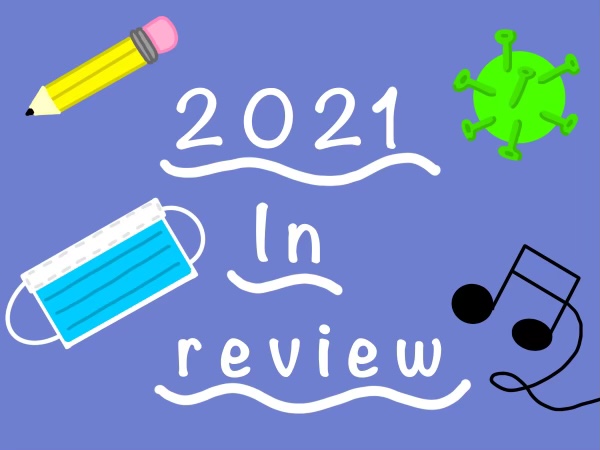 2021 had many events that impacted some of our student body.

Betty White’s death along with a new COVID-19 variant has been some of the many highlights throughout this past year. Students and teachers are impacted tremendously by this year and what it has brought us. Let’s turn back time and reflect on what has happened in 2021.

2021 was a year full of turbulent political events

2020 was filled to the brim with protest and calls for action, and 2021 was no different in that regard. The year immediately started off with a bang when over two thousand radical Trump supporters stormed the Capitol building over what they believed to be a fraudulent election. Five people lost their lives, and countless Congressional representatives’ lives were endangered as well. Following this, former President Donald Trump was impeached for a second time and days later Joe Biden would be officially inaugurated into office.

Domestic Policy gradually got back on track in the following months despite the chaos in January. Firstly, after much demand from the public, The American Rescue Plan Act (Stimulus Act) offered $1,400 to Americans struggling during the pandemic in a 50-49 decision. Congress passed the Juneteenth National Independence Day Act in a historically bipartisan 415-14 decision. The act federally recognized Juneteenth as a national holiday and helped push forward the recognition of black history within the United States. These acts helped to offer some calmness after the turmoil of January.

Other political events were less thrilling to witness, such as Andrew Cuomo’s disgraced resignation following allegations of sexual misconduct. Others were controversial, such as the Texas Abortion Ban, which was broadly unpopular among most groups.

One of the most critical moments in American politics came when the war in Afghanistan came to an abrupt and hasty end. A series of decisive Taliban victories and American mismanagement ultimately led to the two-decade long war reaching a rocky conclusion. Hundreds of thousands of people within Afghanistan have been displaced as a result of the second Taliban takeover. Under the Talbian, human rights, and especially those of women, have been trampled and disregarded. There are still Americans trapped in Afghanistan to this day.

Music from the year of 2021 influences society

Everyone has their own taste in music. hip hop, country, indie, the list goes on for miles. People who use Spotify get their year in review list for what artists they listened to the most every December. Spotify then took everyones music choices and decided to see who were the overall top streamed artists in 2021. The top five artists include Bad Bunny, Taylor Swift, BTS, Drake, and Justin Bieber. These five artists have varying styles of music, personal views, and lifestyles, but can still have one thing in common of making the world a little happier with their music.

The number one song in 2021 happens to also be on the number one album of 2021. Olivia Rodrigo’s “Drivers License” on her album “SOUR” was streamed over 1.1 billion times on Spotify alone.

The top artist, Bad Bunny, has now been the number one streamer in the world for the past two years in a row. Bad Bunny (or Benito Antonio Martínez Ocasio) started his music career in 2016 releasing his first song “Diles.” His music career grew over the next four years making him the number one artist in 2020 and once again in 2021.

The year of 2022 is finally here, and the United States has been fighting with COVID-19 for over two years. Let us go back to the beginning of 2021 when District 204 was hybrid since the school’s plan was released the week of Jan. 18. The first vaccines such as the Moderna, Pfizer, and Johnson and Johnson were distributed across the United States to American citizens. Our world as a whole has distributed over 9.52 billion doses of COVID-19 vaccines total even though some citizens were reluctant to get vaccinated.

While vaccines were being created, District 204 students dealt with online learning or the hybrid option if they felt comfortable to attend school. Although there were many memories that go along with zoom classrooms, online learning damaged some students’ mental health. Sitting behind a computer looking at turned off cameras for a majority of the school year, instead of socializing with peers, had taken a toll on many students and teachers. The hybrid option offered created an added stress to many students and teachers as to whether they would be exposed to COVID-19 on school grounds.

On a brighter note, when the school year ended, there was summer of 2021 where everyone was outside in the warm weather, there were not as many COVID-19 cases, and it was a break much needed for the people especially affected by COVID-19 through their mental health. Concerts such as Lollapalooza and Country Thunder stayed open with specific COVID-19 guidelines to ensure safety for everyone. Local pools opened up, and outdoor seating was now popular at restaurants.

Then summer ended, and District 204 announced that school would be taking place in-person. This was exciting to some people as they could see some of their peers and make better connections with their teachers. With masks and social distancing guidelines, students walked in on their first day of school and soon enough, Thanksgiving and winter break had arrived, and different COVID-19 variants had made their way to Illinois. Although COVID-19 was an obstacle, the world has maybe not overcome this obstacle, but we have learned to deal with it for the future during this past year of 2021.