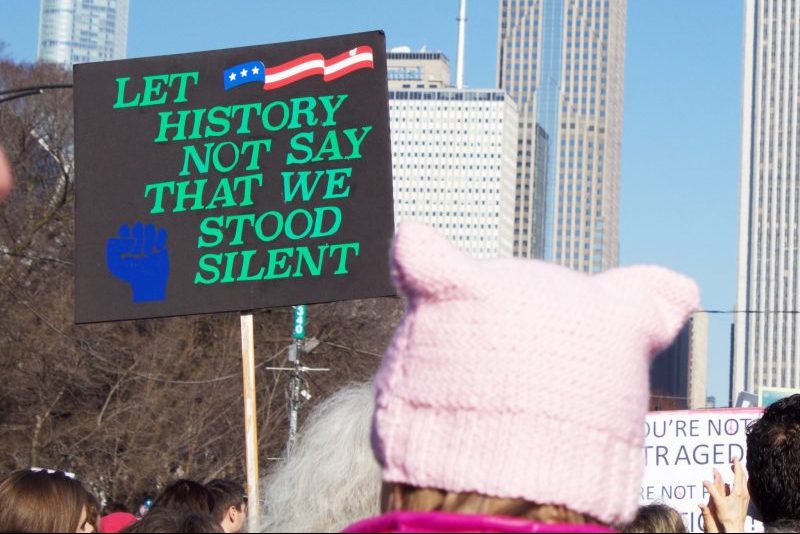 Chicagoans rally together for Women’s March

Protesters filled downtown Chicago’s Michigan Avenue on Saturday, waving signs and singing chants such as “These are our streets!” and “We don’t want your tiny hands anywhere near our underpants!”

Marchers of all ages, races, sexualities, and genders parade through the city in unity, all bearing the same message: to promote women, in some capacity or another. “I was so excited to go to the protest,” Metea Valley junior Katie Reed said. “Sometimes I feel like I can’t really express my opinion and make a difference where I live yet because I can’t vote, but when I got there, I was overwhelmed with this sense of calmness and this feeling of, ‘Wow, I’m part of a movement that’s making a difference.’ and it felt amazing.”

Millions of women and men from all faiths and walks of life gathered around the globe to support human rights by protesting in the Women’s March on Washington last Saturday. Sister marches were held in Chicago, New Zealand, Berlin, London, Seattle, Boston, New York, and L.A., but the main event took place in Washington D.C.

Organizers intentionally set the march on the day after President Trump’s inauguration to send the incoming administration a message. “I think that it was crucial to have it after he was inaugurated. We need to show Donald Trump that women aren’t going to just be grabbed by the ‘whatever,’” Reed said, referencing a comment made by President Trump in 2005 that sparked mass controversy. 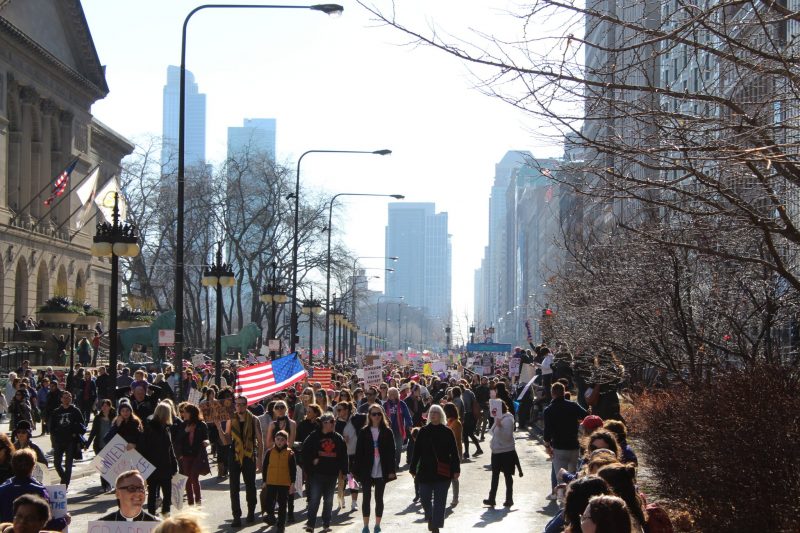 The Chicago Police Department granted the organizers of the Chicago Woman’s March an 80,000 person permit, but were met with approximately 250,000 people, according to volunteer Diane McCarthy. They ended up canceling the official march after the rally, but marchers paraded through the streets anyways. Although there was a surplus of people, there were no arrests made or any issues that had to be dealt with. “There haven’t been any disruptions…this group of people has been a pretty calm and cooperative bunch,” fire marshall Frank Velez said.

Protesters showed up to support the cause in various ways: as marchers, as volunteers, and in solidarity. People who were not able to be there were able to show support in other ways.

Many stores had signs in their windows showing their support for the cause. “We’ve been busy all morning, which is great because I wasn’t able to march with everyone else. At first I was pretty sad, but there have been so many people in and out of here from the protest. It feels like I’m kind of in it anyways,” employee of a nearby store Carla DeWaard, said.

The volunteers that showed up were from numerous organizations in Chicago – ranging from schools to local clubs to individuals who just wanted to make sure everyone had a good, safe time. One of the volunteers, Molly Johnson, who is deaf and can read lips, spent her time helping those who couldn’t during the protest. “I’m here to make sure everyone with disabilities who wants to participate is able to. I really support the cause, so I think it’s important to gather everyone who can come to be here,” Johnson said.

When the topic of the election came up her expression shifted. “The new incoming administration is scary because of how many changes and reforms they’re going to make of our healthcare system, amongst other things. A lot of people rely on what we have, including me, so I’m also here to fight for that,” she added.

The tone of the march was uplifting and determined in the sense that everyone was there to empower each other and support one another, but there was a melancholy feeling that still lingered in the air. “Initially, I was pretty excited to be here but in all honesty, I’ve been sad all day looking at all the people who are going to potentially lose rights, and the people who feel belittled by this new administration’s narrative.” marcher Kelly Holst said. Many people felt that just marching wasn’t enough. “Don’t just hold signs and sing chants. Do something. Vote in the midterm elections in two years,” marcher Lindsey Holst said.

While the march represented very important and sometimes polarizing issues to women, it didn’t mean that it wasn’t still a great experience for goers.“My experience was fantastic! Everyone there was so kind and sweet. I got to hug, cry, and sing with complete strangers and it was amazing,” Reed said. “I think that this will impact Trump supporters and show them that we aren’t passive, and we will fight to be seen as equals,” she added.

Many people felt empowered by this large wave of unity and belief in the same cause. “I think what I love about this is that it’s global. The future is female. Women are the creators of this world, and through them we are going to find our collective humanity, so I’m here in solidarity,” marcher Andrew Duckett said.

While the majority of the people present supported the cause, there were also people there who disagreed with the ideology of the event. “I think the whole thing is stupid,” Mark Owen from Schaumburg said. “First of all, women already have equal rights. Second of all, people here don’t even know what they’re marching for. You look around and see Black Lives Matter posters, and then you look the other way and hear people chanting for free healthcare. This isn’t a women’s march, it’s just another anti-Trump protest,” Owen said.

In the end, supporters were convicted in what they were marching for.

A homeless man, Oweez held a sign saying “Even homeless guys can respect women’s lives. Why can’t the president? He can learn a lot from a bum. Please help. Thanks.”

Others felt the same way. “Intersectional feminism is very important to me. All of the issues brought up at the March impact women, such as racism, xenophobia, and homophobia. They all needed to be represented at this march. I’m so glad that I was able to go,” Reed said.

Marchers were there for a multitude of reasons. They were there for their daughters, for their mothers, and for their sisters; they were there to promote healthcare policies, to promote basic human rights, and to promote the message of respect for all. Regardless of why they marched, the protestors started off President Trump’s presidency with a loud message and a new chapter in the history of women’s rights.