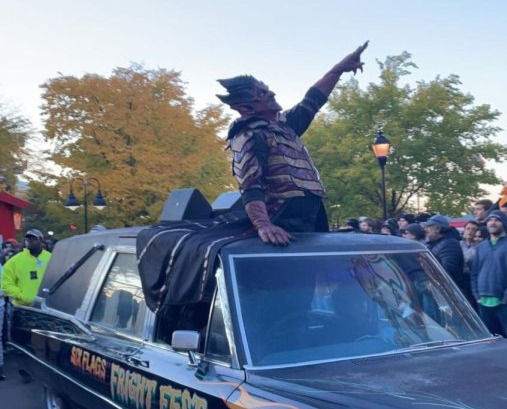 Halloween recap: the likes and dislikes of haunted houses

As the Halloween season comes to a halt, there is always a discussion about popular seasonal activities, one being haunted houses. As haunted houses tend to attract people seeking a thrilling experience, it is a great way to celebrate the spooky season. Yet, other individuals think differently about haunted houses and enjoy other festivities regarding the Halloween season including baking fall treats, apple picking, watching Halloween movies, visiting local pumpkin patches, and more. Here are two people with completely different opinions on a popular, yet arguable topic.

As a person commonly described as an adrenaline junkie and constantly seeking a thrill, I love the haunted house season. The anticipation leading up to arriving at the haunted house is intimidating. Yet, the exhilaration that is caused by being frightened is something that you do not experience on a daily basis, making the experience one to remember.

For that reason, during this spooky season, I went to haunted houses located in the Chicagoland area, consisting of places like the Basement of the Dead, Massacre and Fright Fest, enjoying each attraction a lot, despite their differences.

To begin, Six Flags is a lot farther compared to other haunted houses around the Naperville and Aurora area. I had to consider that the event itself does not start until 5:45 p.m. So, if planning on visiting, I highly suggest hitting some of the roller coasters before the start of the event due to long lines and prolonged wait times. As a hazard, Six Flags warn that they ¨will show no mercy after 6 p.m.¨

As a small guide to prepare for the frights of the night, make sure to check out the Scare Zones located throughout the park, the Haunted Houses, and the Monstertainment throughout the day. More details about each attraction are available on their website.

At the end of the day, I enjoyed Fright Fest despite the lack of dressed-up individuals in the Scare Zones. Besides that, I enjoyed walking throughout the park with my friends during the event, going from ride to ride while different people scared us.

Similar to the Basement of the Dead, Massacre Haunted House has different themed attractions throughout the haunted house, startling me many times. There is no question that Massacre has been awarded #1 Haunted House in Illinois by the Chicago Tribune & Haunted Illinois.

I have been to both the Basement of the Dead, Fright Fest, and Massacre Haunted House prior to this year, I feel like the line leading up to the haunted house is almost more alarming than the haunted house itself. The suspense of not knowing what will happen next is nerve-racking.

As the anticipation can be daunting, study co-author Margee Kerr, a sociologist at the University of Pittsburgh who studies fear further explains how horror-loving individuals’ brains work and how people enjoy this type of sensation.

“A lot of activity in the body is in anticipation, and it is in that conclusion where the enjoyment comes in,” Kerr said.

Additionally, Kerr found that feelings of anxiety and stress lessen from frightening activity as “being scared interrupts one’s thinking.” Confirmed through her experiment, she conducted a survey of individuals attending ScareHouse, an “extreme” haunted house located in Pittsburgh.

Overall, a greater amount of people proclaimed that they were in a better mood after enduring the frights compared to a lesser number of people who announced tiredness and anxiety after the haunted house than before.

Despite thrill-seekers like me who enjoy the exhilaration of frightening festivities, other people think differently of these spooky attractions.

As a perpetual scaredy cat, haunted houses are one of the last places I want to be. To start, there are people in scary, gruesome makeup jumping out from every corner. It is a double jump scare. You jump, calm down, then register the frightening character in front of you and become fearful again.

Additionally, the people in the surrounding area are also scared, which makes it easy to run into someone. This could be scarier than the actual scary people. Imagine finally calming down and the person behind screams, causing yet another fright.

The entire time you are on edge, wondering what will happen next- which could be the appeal of them- but I have never enjoyed that.

Some people say that they go to haunted houses for the rush they get after exiting one, but that means you can only fully enjoy an experience after you have finished it. I would prefer to do something that I would enjoy the entire time, not just the aftermath. To me, the thrill after is not worth the fear.

Also, I would not enjoy having a bunch of other people see me get scared. That, and the act of being in fear, are both of my worst nightmares combined into one night of chaos.